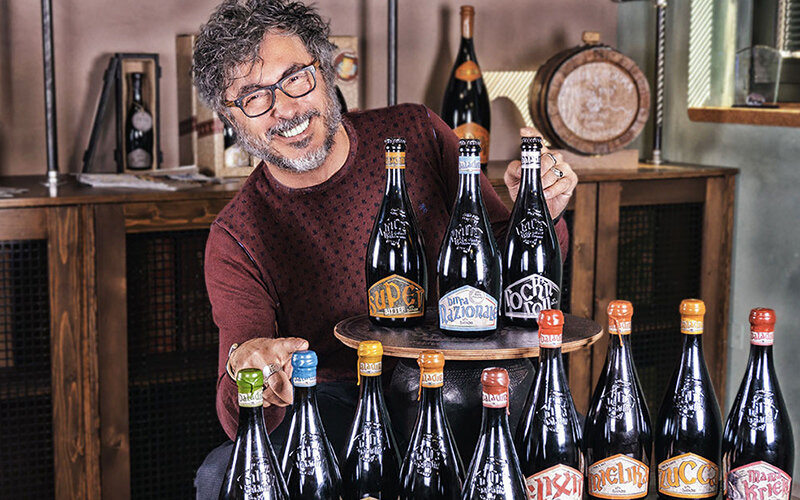 In the middle of the Langhe area was born this brewpub for the degustation of the beers. 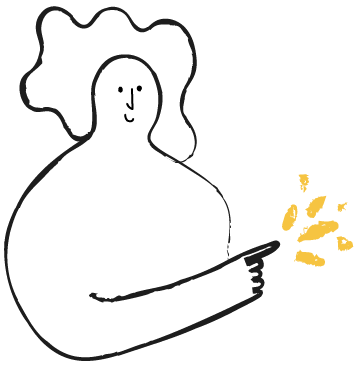 From the dream of Teo Musso the agricultural birrifice baladin was born, the first that entirely supports the productive cycle of beer, starting from the raw materials

Birrificio Baladin was founded in 1996 in Piozzo, a small village in the hills of the Langhe in the province of Cuneo. It comes from the passion of Teo Musso and his partner Nora for this drink, so much so that they decide to open the brewpub in a courtyard and under a circus tent to which they give the name "Baladin" (storyteller in French).

Over the years Teo has become increasingly close to the world of beer thanks to the numerous trips and collaborations he has developed with small breweries in Belgium. He studied new techniques and developed new machinery which he then installed in Piozzo in 1996, when he began to produce. From that year the success multiplied, until 2005, when Carlsberg gave him the prestigious "semper Ardens awards for beer culture" award that the multinational awards to a character who has been able to contribute to the development of beer culture in the world.

Since 2012 the Baladin Brewery has become an agricultural brewery with the aim of taking responsibility for the entire production cycle of beers, starting from the land and the raw materials that are generated from it. The ultimate goal is to fully support this cycle, producing not only wealth but also ethical values. 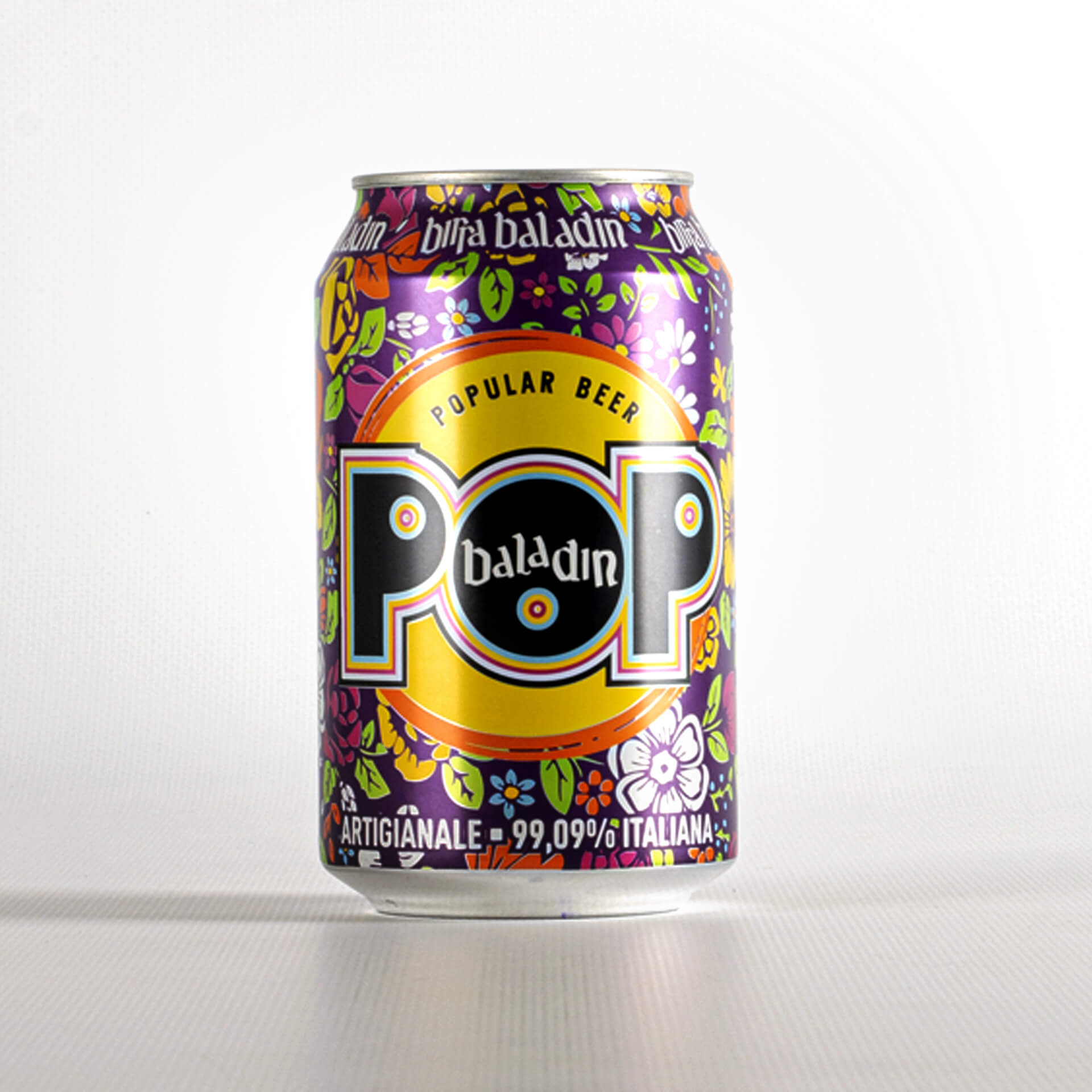 Pop Baladin Beer in a Can Birrificio Baladin
With a white foam and a golden colour, this Pop beer was created by Teo Musso as an idea of ​​providing a quality beer in a different container: the can. It thus makes an excellent product, easier to use. This Baladin beer is made with Mosaic and Cascade quality flowering hops, produced in Italy. The herbaceous hints given by this hop go well with the malty taste.
€3.20 €2.89
-10% 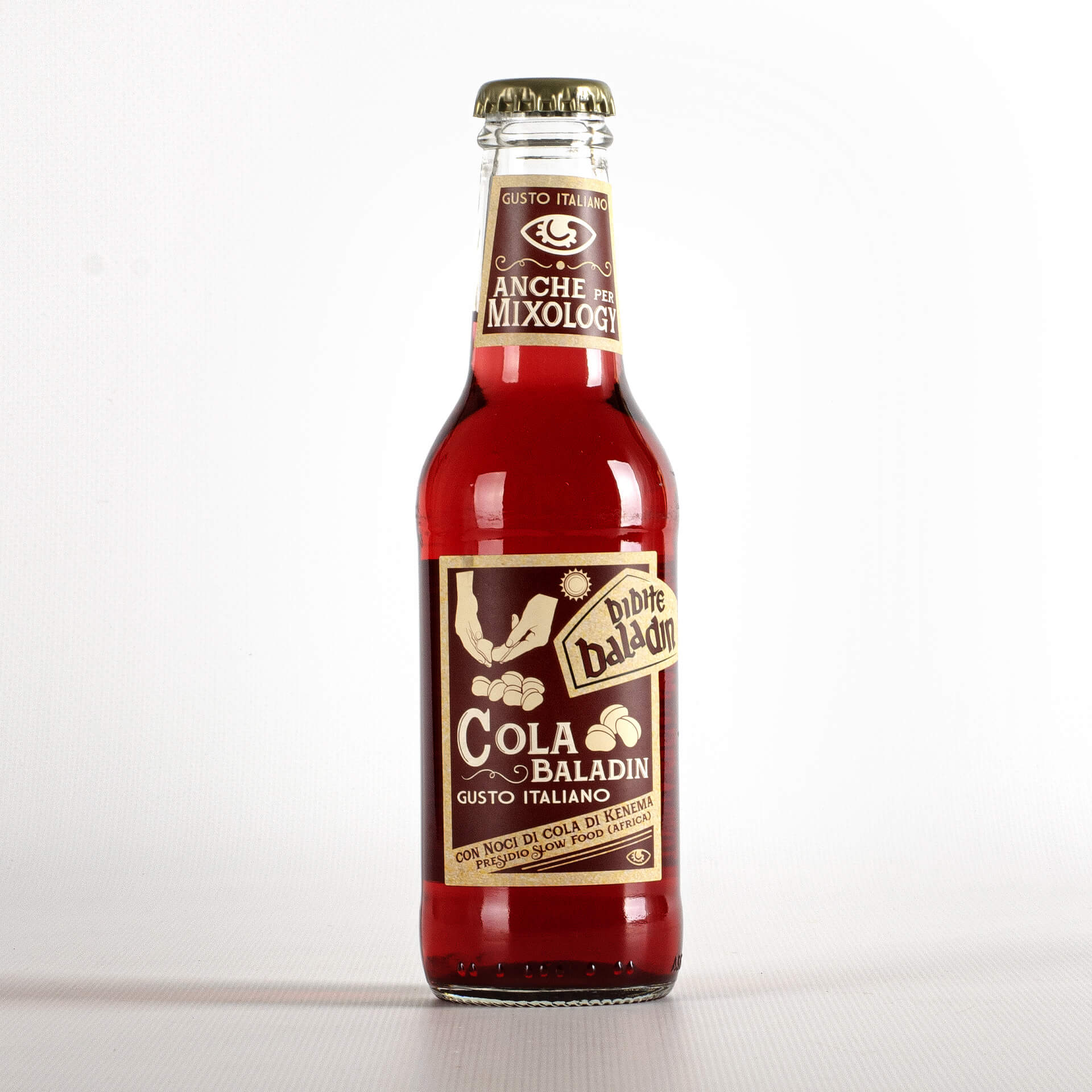 Cola Baladin Birrificio Baladin
“Cola Baladin” is a soft drinks which contains no coloring or preservative and is produced with the kola nuts bought from the Kola Slow Food Presidium” in Sierra Leone, and part of the revenues from the its sales will be donated to the Slow Food Foundation for Biodiversity to support the Presidium project. Another important and rather odd thing about this drink: the use of these nuts, and the necessary choice not to use artificial colorings, means that this new Baladin drink has a rather “unusual” color for a cola: IT’S RED! This red color sets it apart from more “commercial” products and makes it immediately clear that our intent is not only to make a profit: our drink is also a sign to show consumers that it often takes very little to play our part in supporting those who cannot even support themselves. Sierra Leone is one of the unfortunately too many African countries tormented by both political and economic wars and fights. Ours may be a niche production, but we believe it will help us give the word SUSTAINABILY its full and important meaning.
€1.80 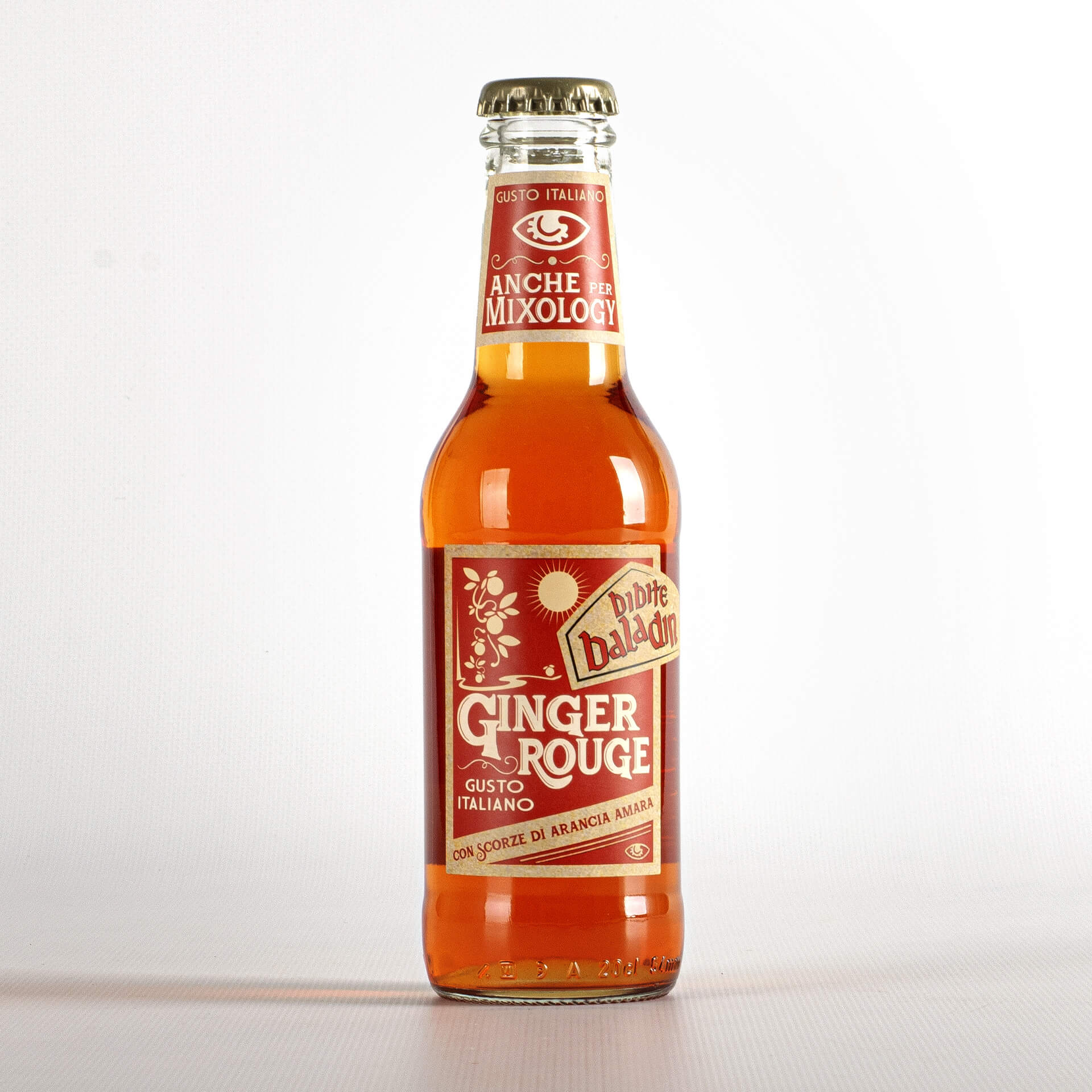 Ginger Baladin Birrificio Baladin
Its ingredients are simply water, natural brown sugar, lemon juice, carbon dioxide and the unmistakable infusion of herbs, zests of bitter and sweet oranges from Gargano PGI, spices and vanilla which give the drink its distinctive aroma and flavor. There is not ginger in the recipe.
€1.80 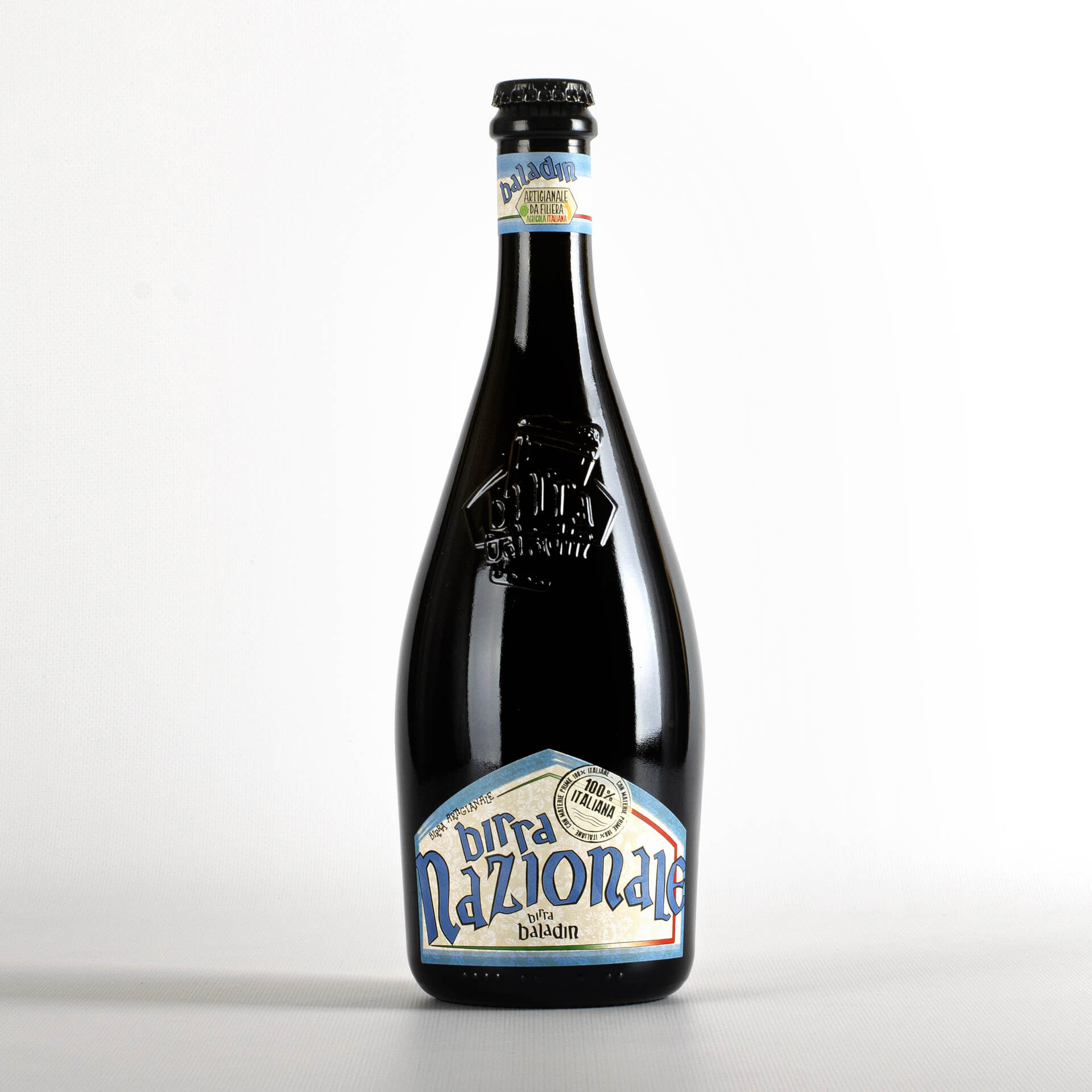 National - lager 75cl Birrificio Baladin
The first 100% Italian beer made with Italian ingredients. An intentionally simple beer: Italian water, barley malt, hops, yeasts and two Italian spices (bergamot and coriander) which combine to create harmony and originality. A beer which suggests more or less daring combinations, but more importantly marks a turning point in the Italian production of craft beer. Nazionale, is excellent as an aperitif and goes well with any dish.
€10.50 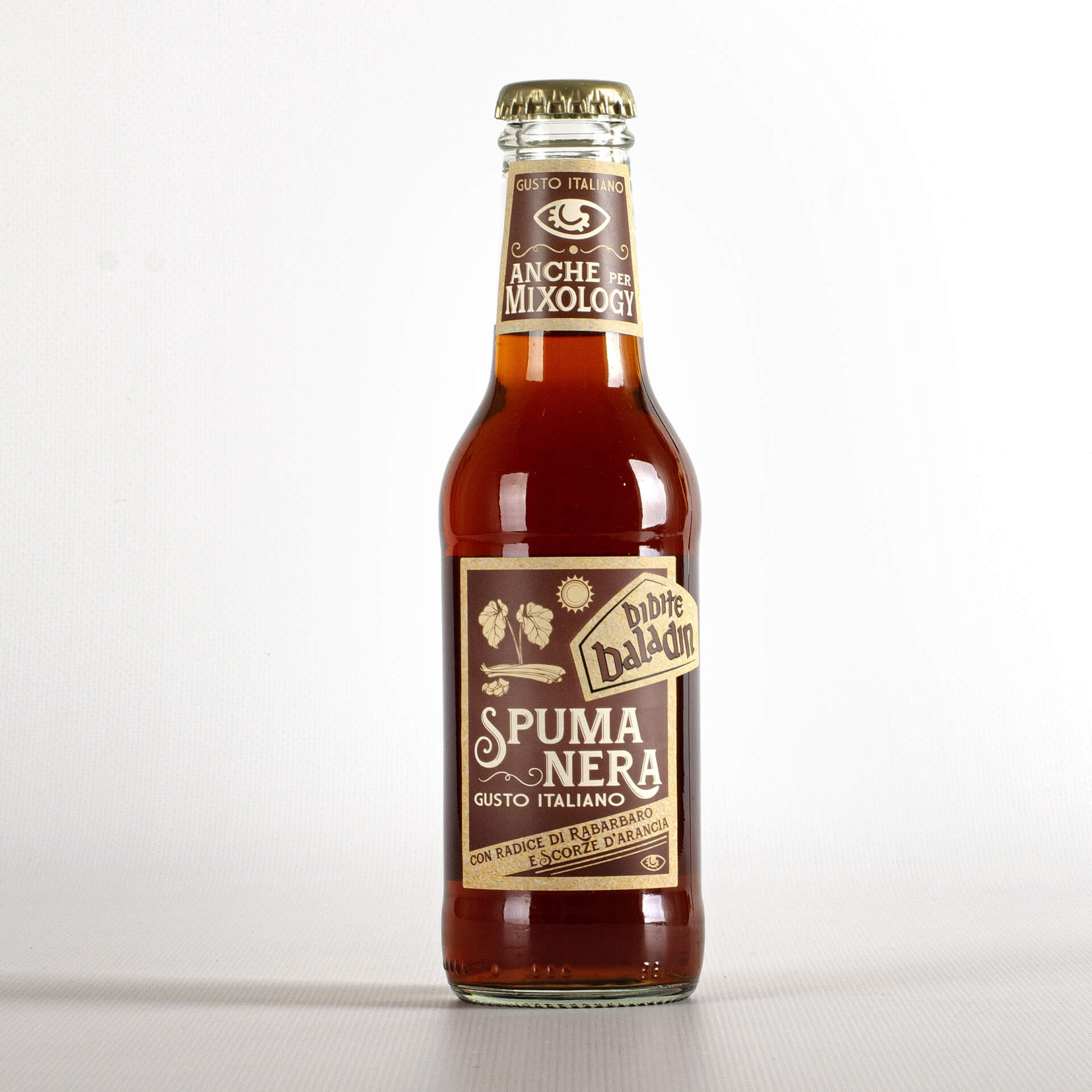 Dark Spuma Baladin Birrificio Baladin
Spuma Nera, or “dark Spuma” as it was once called, may be considered the “mother” of chinotto. We have chosen to go back to the traditional recipe, with a basis of chinotto (a myrtle-leaf orange drink), the red part of rhubarb roots and an orange zest infusion. Of course, no colorings or preservatives are added.
€1.80 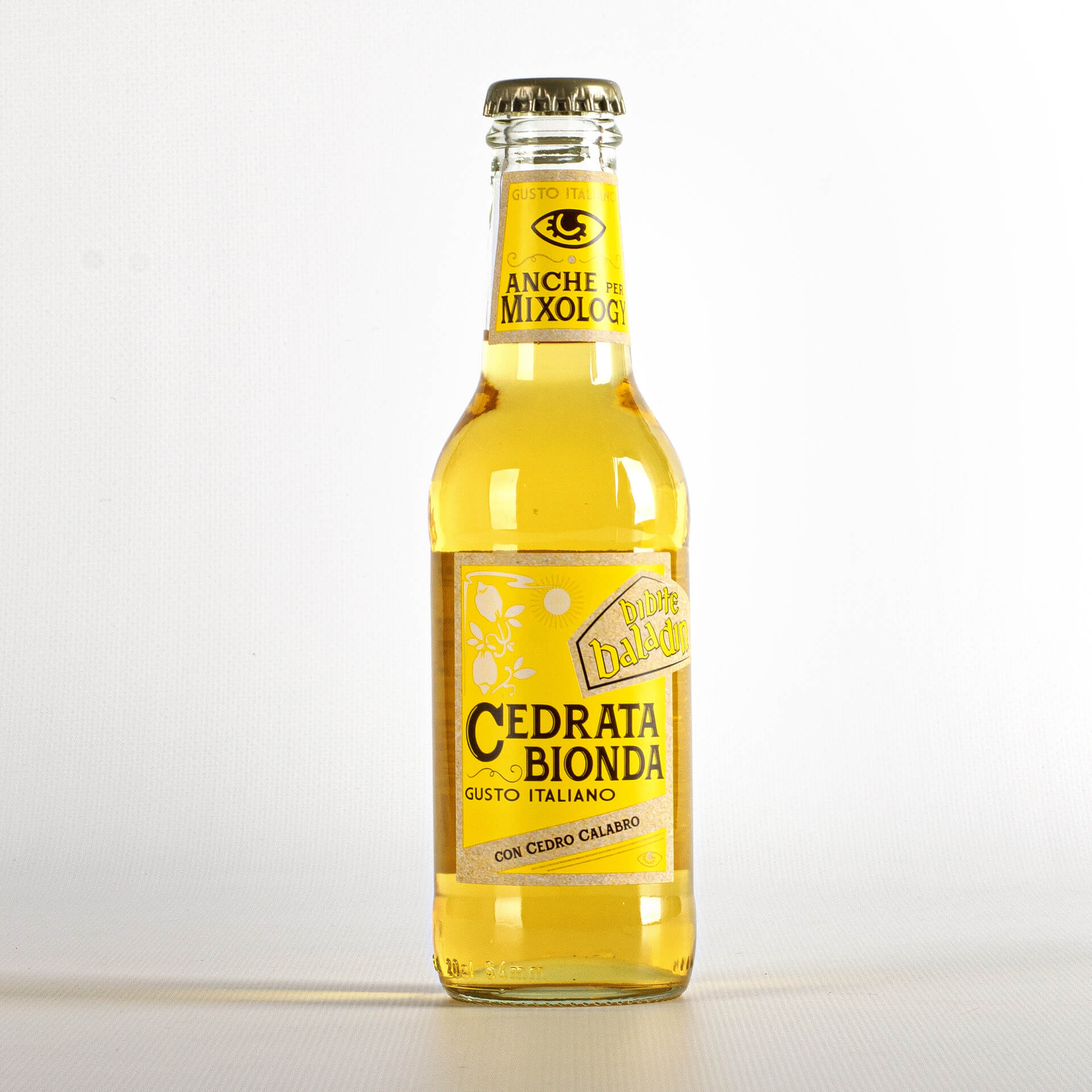 Cedrata Baladin Birrificio Baladin
A journey searching for the taste of times gone by. A taste that our memory has registered but has been hiding for a very long time. This is Cedrata Baladin. Just water, natural brown sugar, lemon juice, carbon dioxide and the infusion of Calabria citrons from Diamante, which give it all its aroma and flavor. Cedrata Baladin is produced with simple and selected ingredients and contains no colorings or preservatives.
€1.80 €0.90
-50% 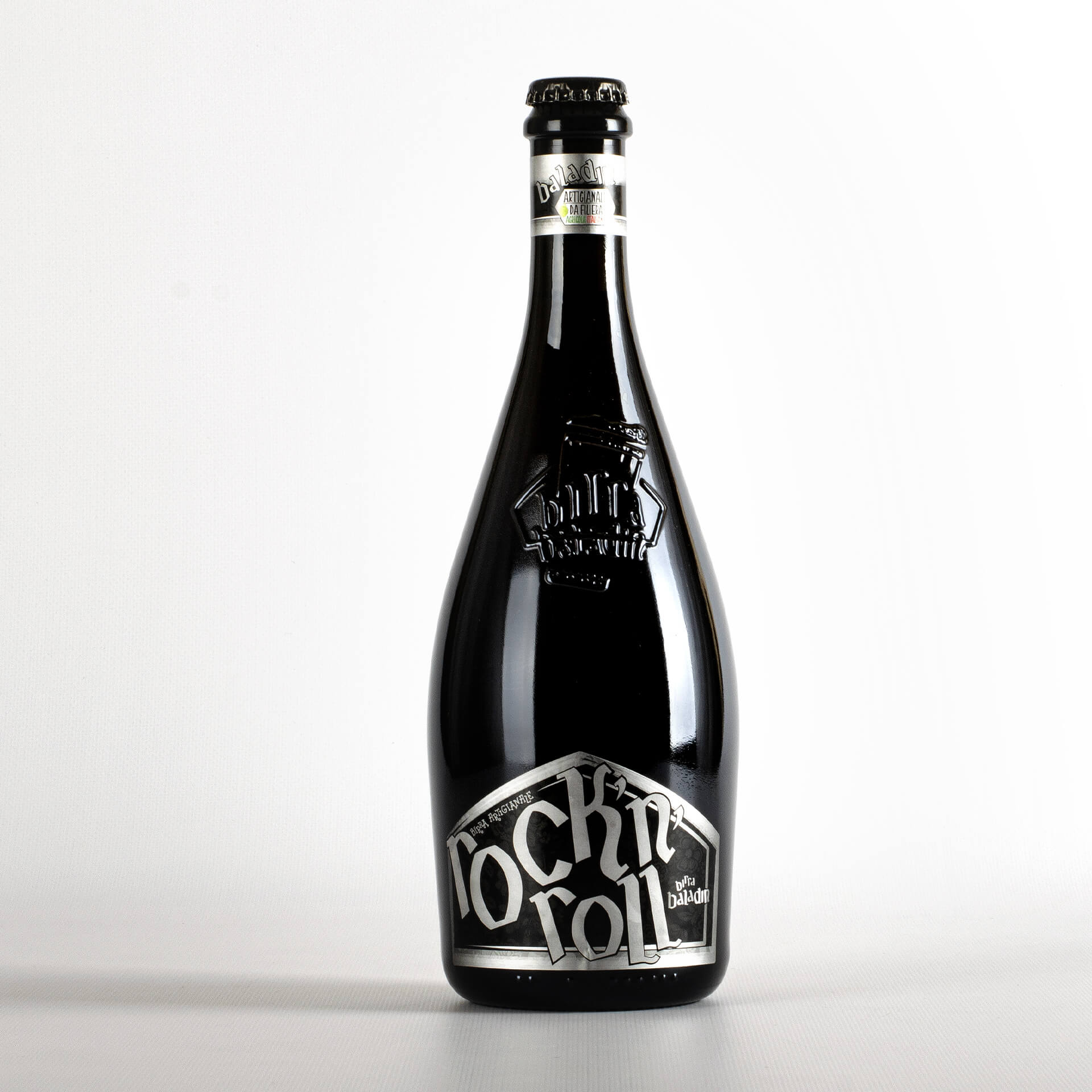 Rock'n'Roll 75cl - Blonde Baladin beer Birrificio Baladin
Water, barley malt, mainly American hops, yeast and pepper for an unmistakably Rock ‘n’ Roll character. A beer whose freshness and the skillful use of pepper blend with the aromas and bitterness of hops in a “musical” crescendo. A true drink’n roll experience which will certainly attract a host of aficionados. To be drunk when it takes your fancy: on its own to quench your thirst, or with cold cuts and cheese at cocktail time.
€10.70 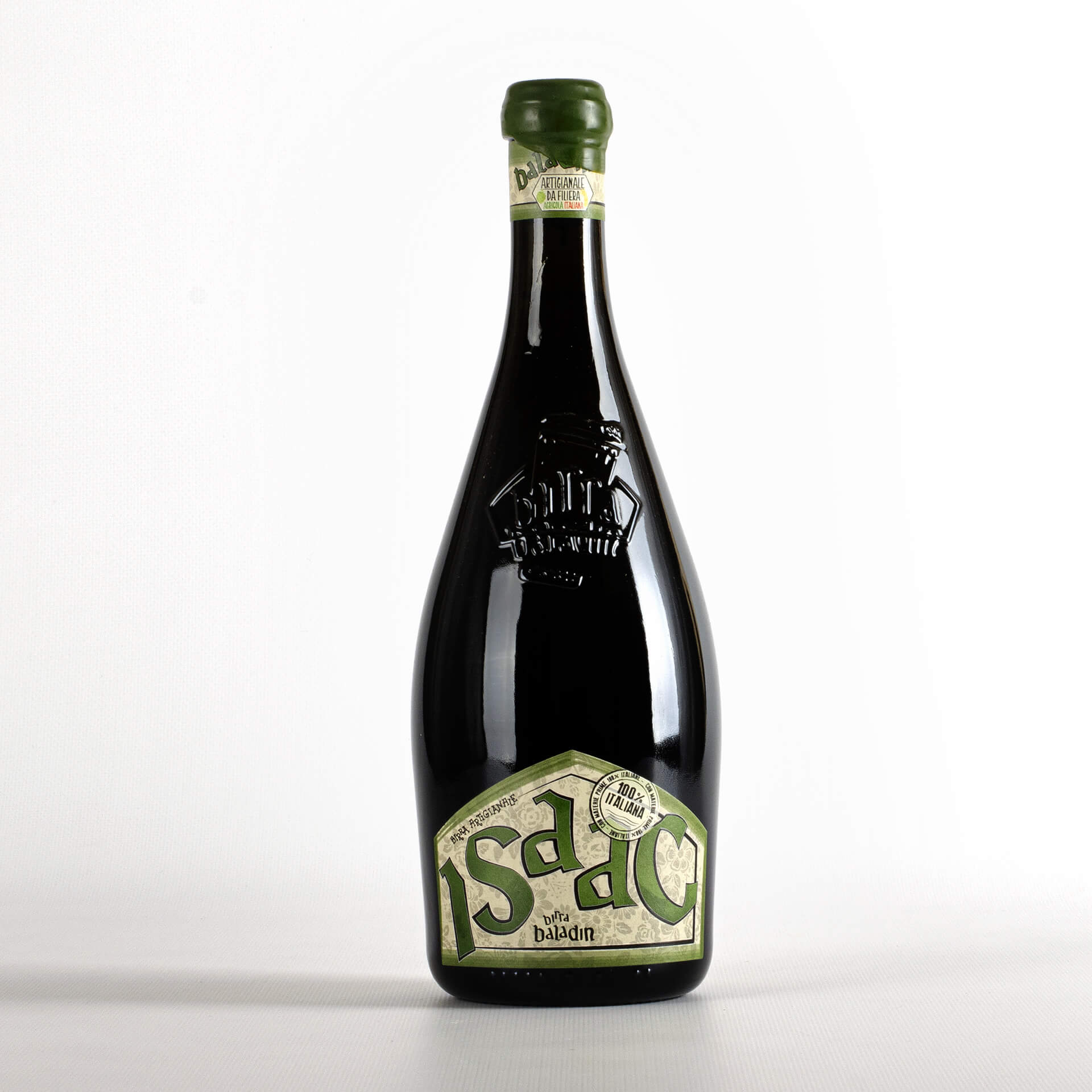 Isaac - white beer 75cl Birrificio Baladin
The creamy head, the intentionally cloudy, apricot color and the scent of yeast and citrus, which blend into spicy harmonies of coriander and peeled oranges, call you from the glass. Refreshing to the palate, it has a light body and is very easy to drink.
€10.70 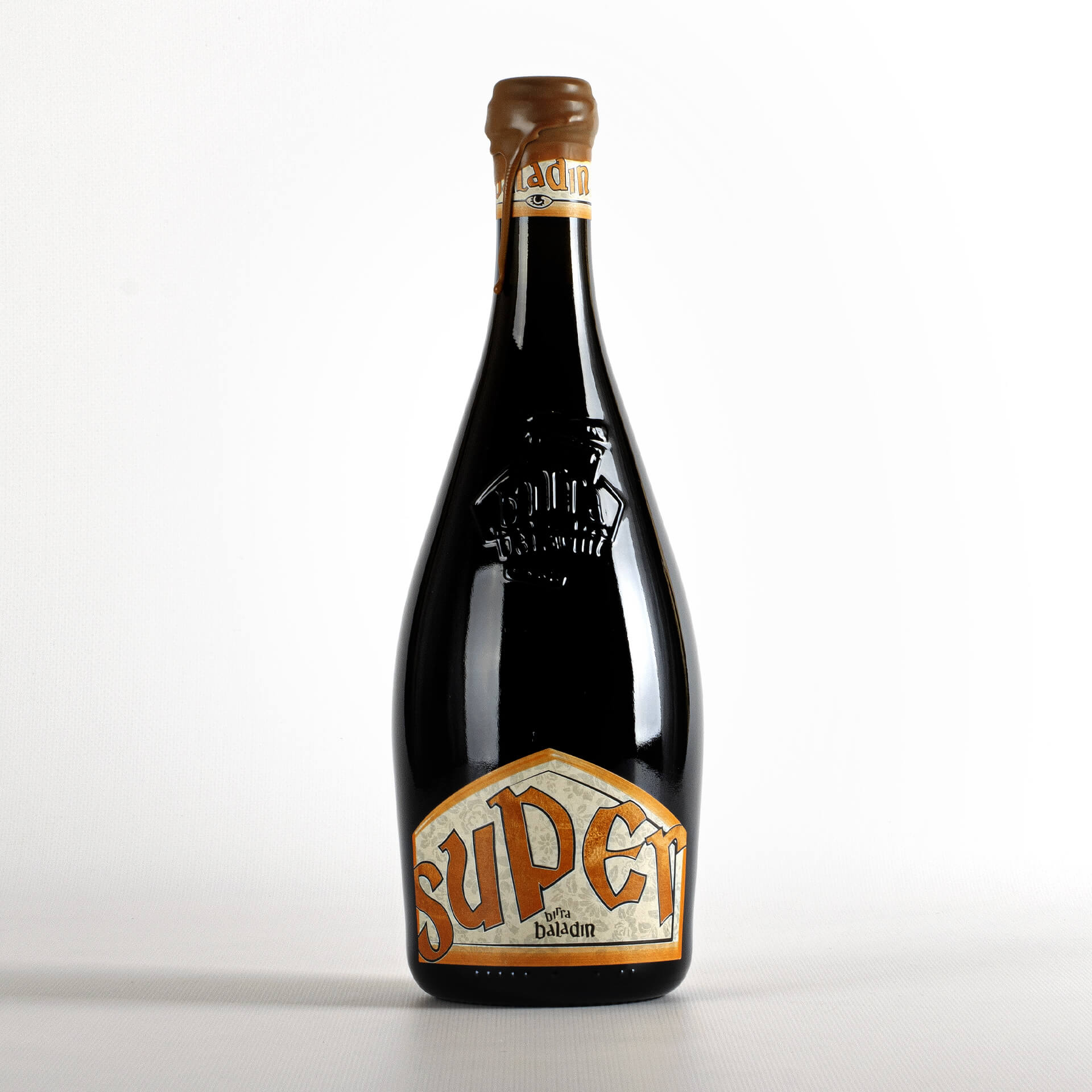 Super - amber beer 75cl Birrificio Baladin
Super takes inspiration from Abbey beers and interprets them with its own style. It has a gleaming amber color and smells of tropical fruit, banana and marzipan. Super is harmony turned into beer and leaves an aftertaste of dried fruit and almonds. Easy to drink and well balanced, it is the ideal accompaniment to food and is perfect to sip in the company of friends.
€11.30 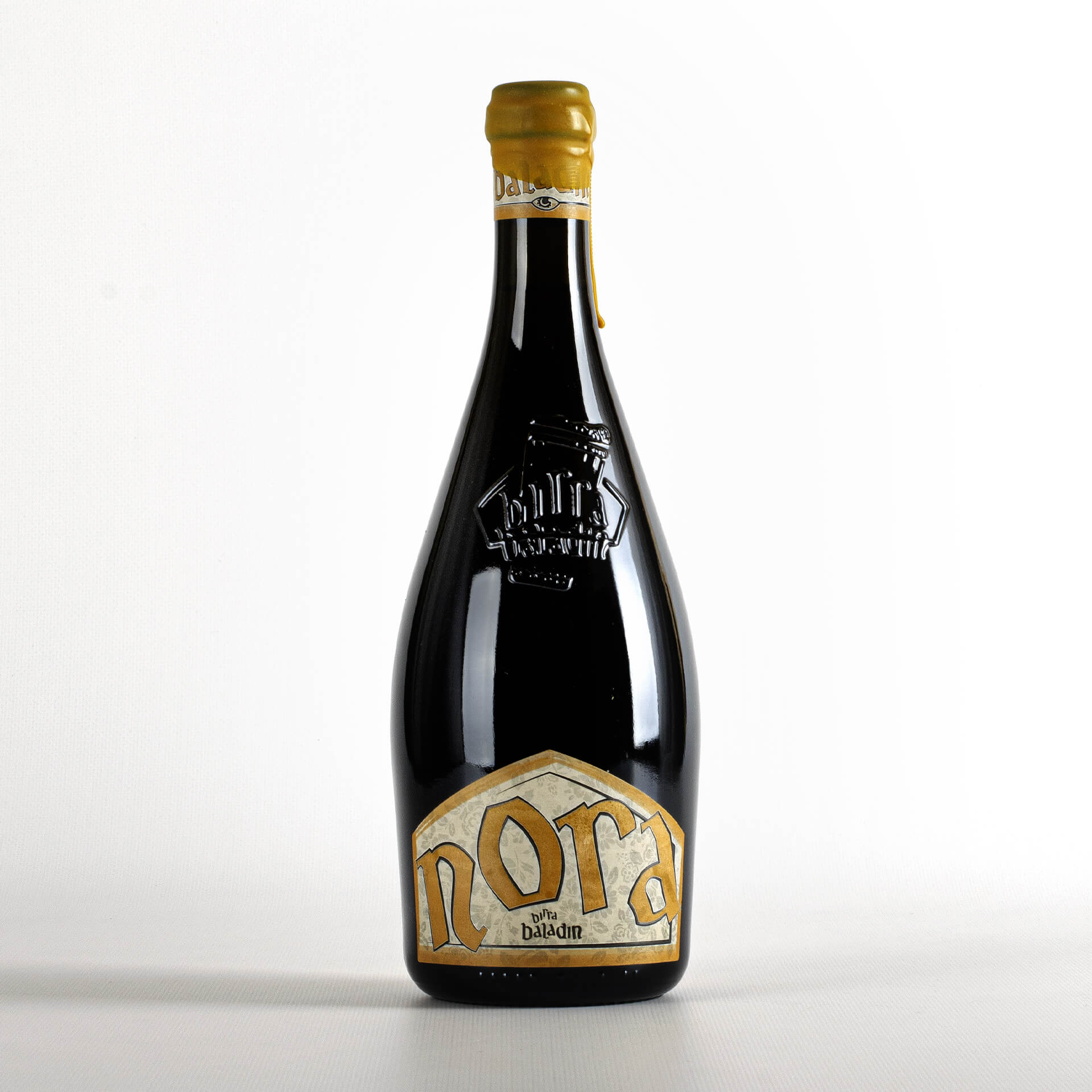 Nora - amber beer 75cl Birrificio Baladin
Nora tells of ancient history, nomadic people and pyramids, spices and Kamut®, which means “the soul of the earth” in ancient Egyptian. Its warm, orange-amber color is complemented by a tall head which releases notes of Eastern aromas, ginger and citrus fruit.
€11.30 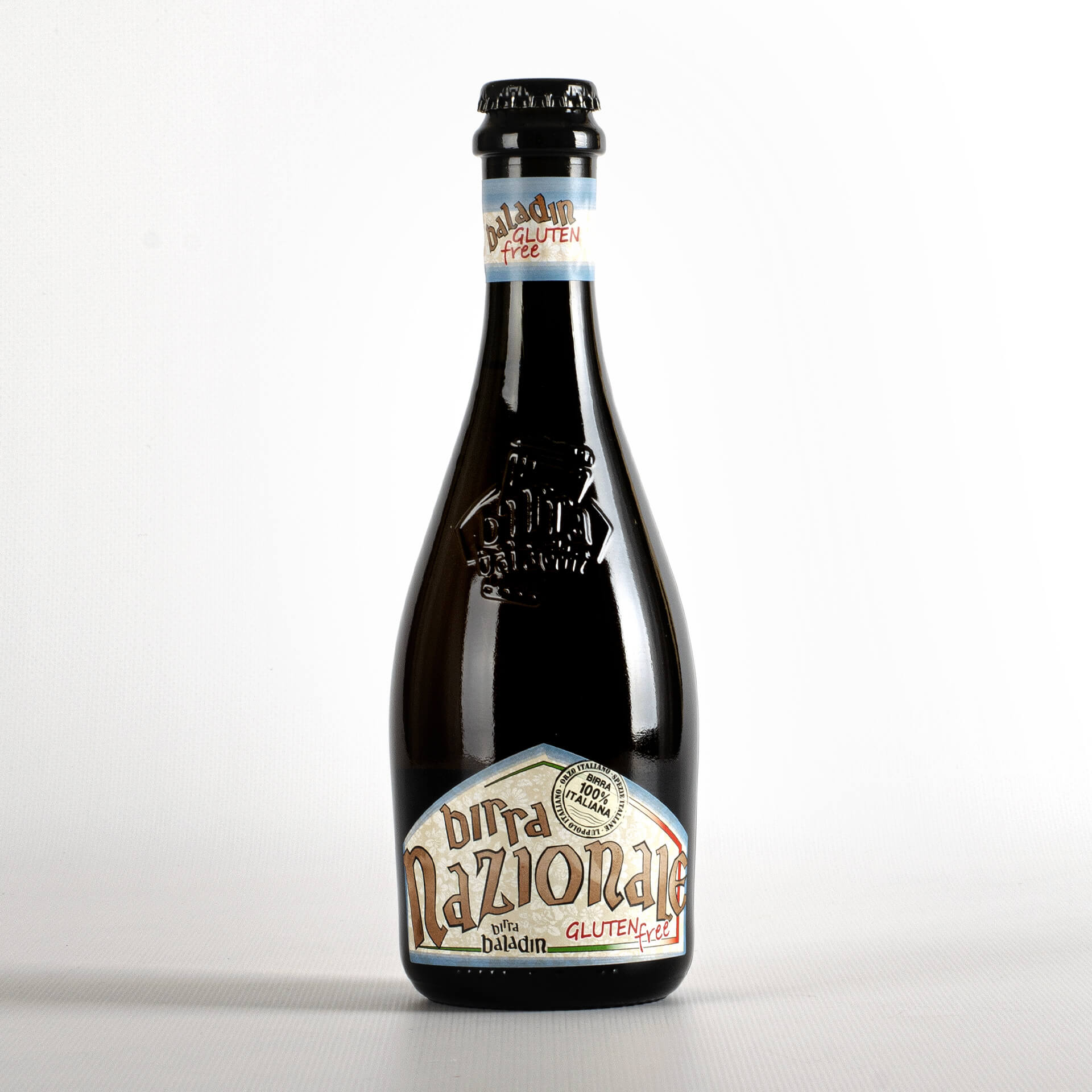 Nazionale Gluten free 33 cl Birrificio Baladin
Only when sipped, Nazionale Gluten Free shows a few minor differences in the interplay between individual tastes, due to the addition of rice - used to reduce the gluten component - which adds a dry note to the chamomile. The result is a fine balance with the moderate bitterness of Italian hops, harvested in our own fields and grown directly by Birrificio Baladin. A clean beer that is easy to drink and will satisfy those who want to drink well.
€4.00 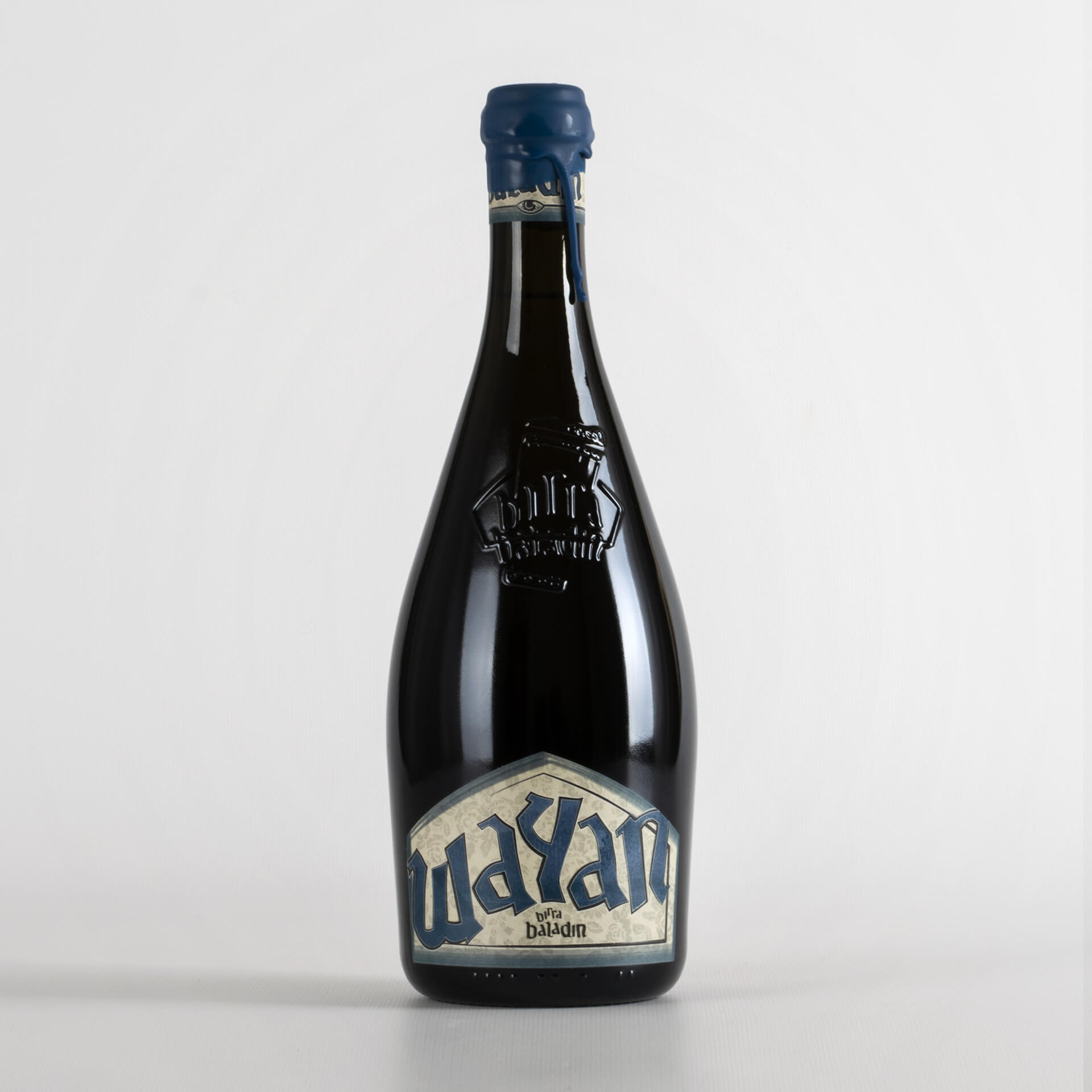 Wayan - white beer 75cl Birrificio Baladin
5 cereals: barley, spelt, wheat, rye and buckwheat. 9 spices, of which 5 peppers, in a renewed mix. Fizzy and refreshing, with a light, slightly cloudy color. Its aromas are reminiscent of the countryside and sun-soaked citrus orchards, and perfectly combine with the notes of orange blossoms, pear and bergamot, present in the recipe.
€11.30 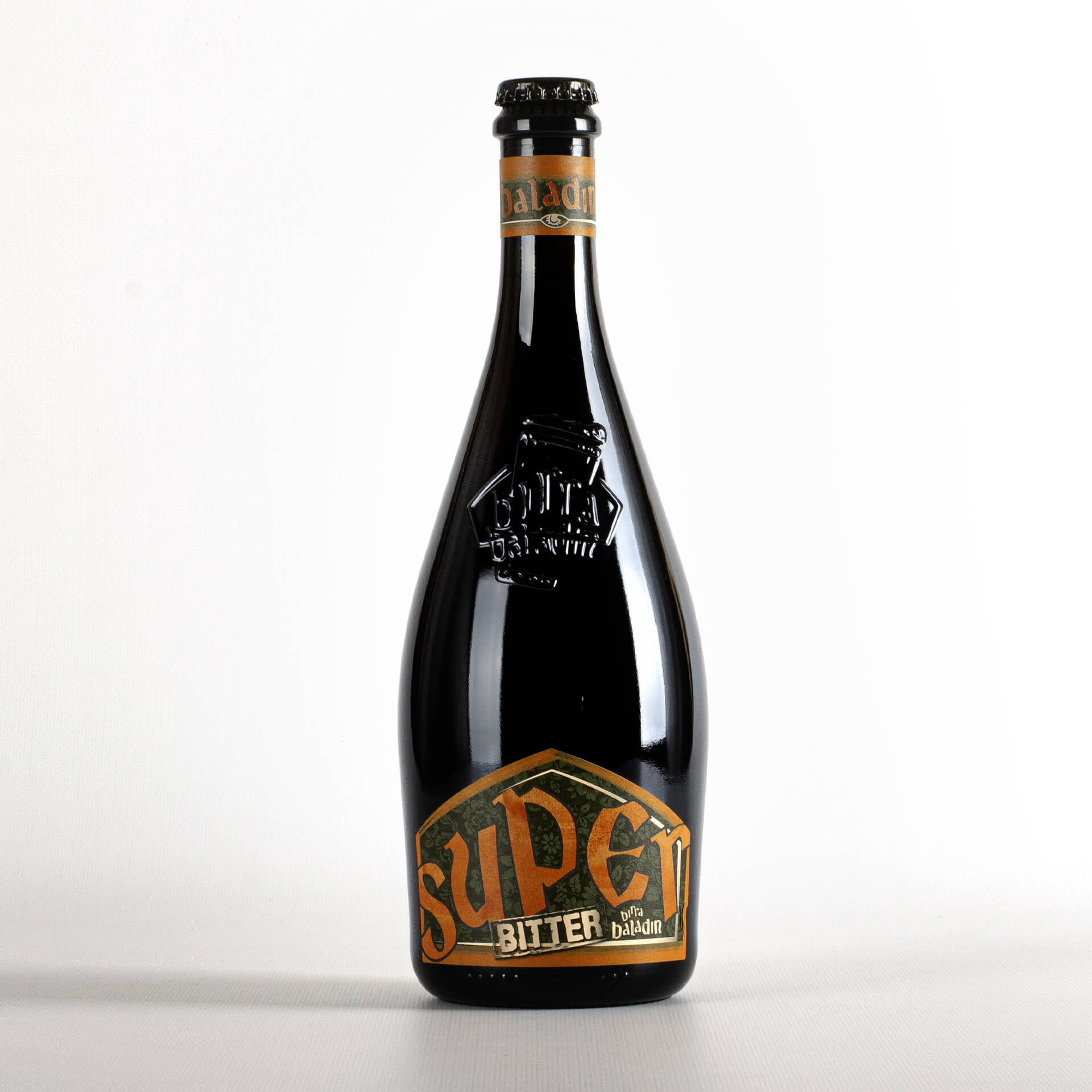 Super Bitter - amber beer 75cl Birrificio Baladin
Super Bitter” it undoubtedly follows the current trend of bitter beers, but without taking it too far! Super Bitter has sure plenty of hoppy scents - given by the generous use of a particular type of American hops called “Amarillo” - but it remains true to its Baladin identity and strikes  a perfect balance with notes of caramel, dried fruit (just a hint) and the bitterness of the hops. Super Bitter, just as its famous “big sister” (if not more), will entice you to spend time with others and socialize.
€10.70 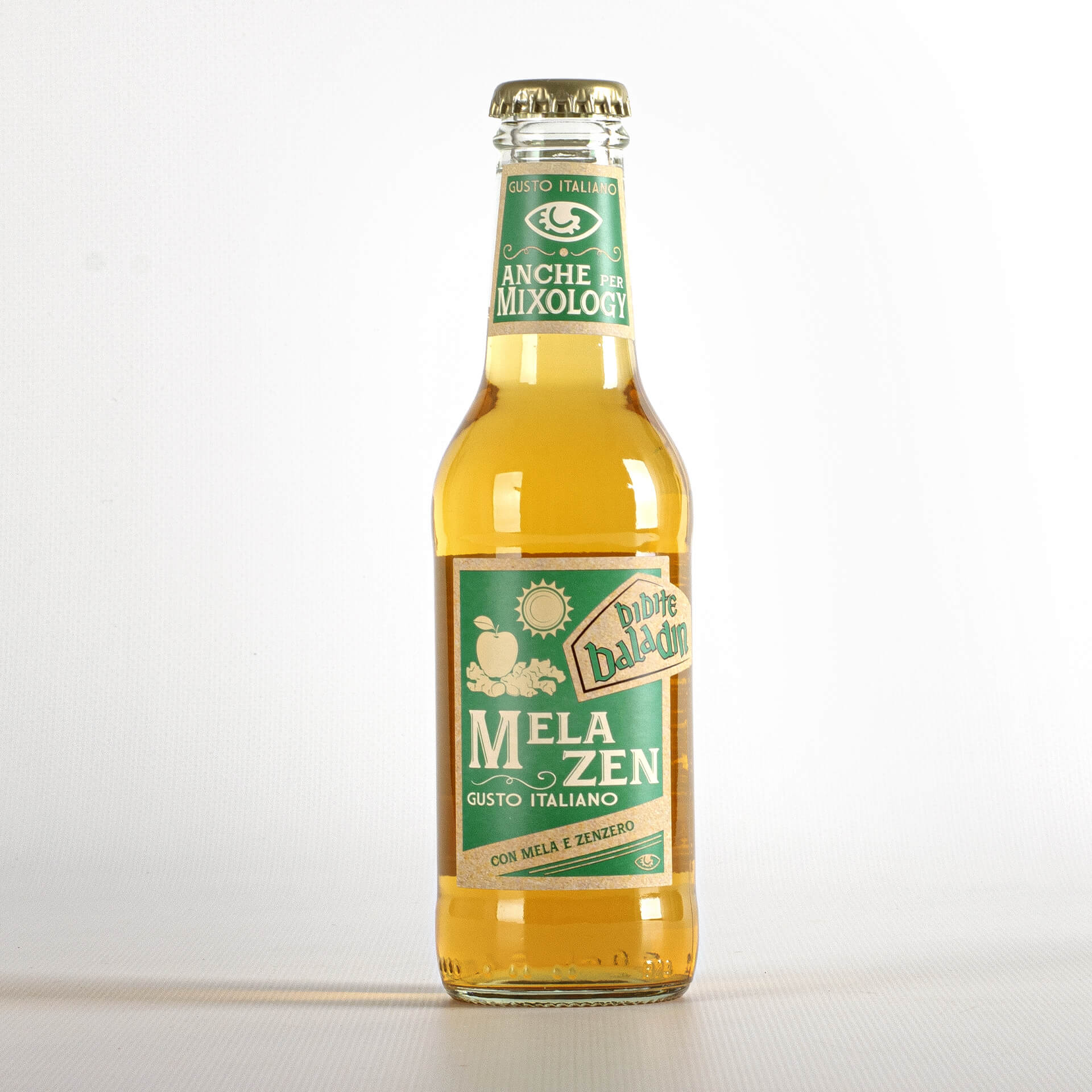 Mela Zen Baladin Birrificio Baladin
With his soft drinks, such as Cola, Teo has managed to refine and modernize “good old” tastes, interpreting them in a very innovative way. But it is Mela Zen that truly marks the beginning of pure experimentation. This is a small batch drink, made with the clear intention to get in contact with those who drink it to create a new taste together. The recipe contains apples and ginger, two excellent products of farming. Fresh, tasty, intriguing…
€1.80 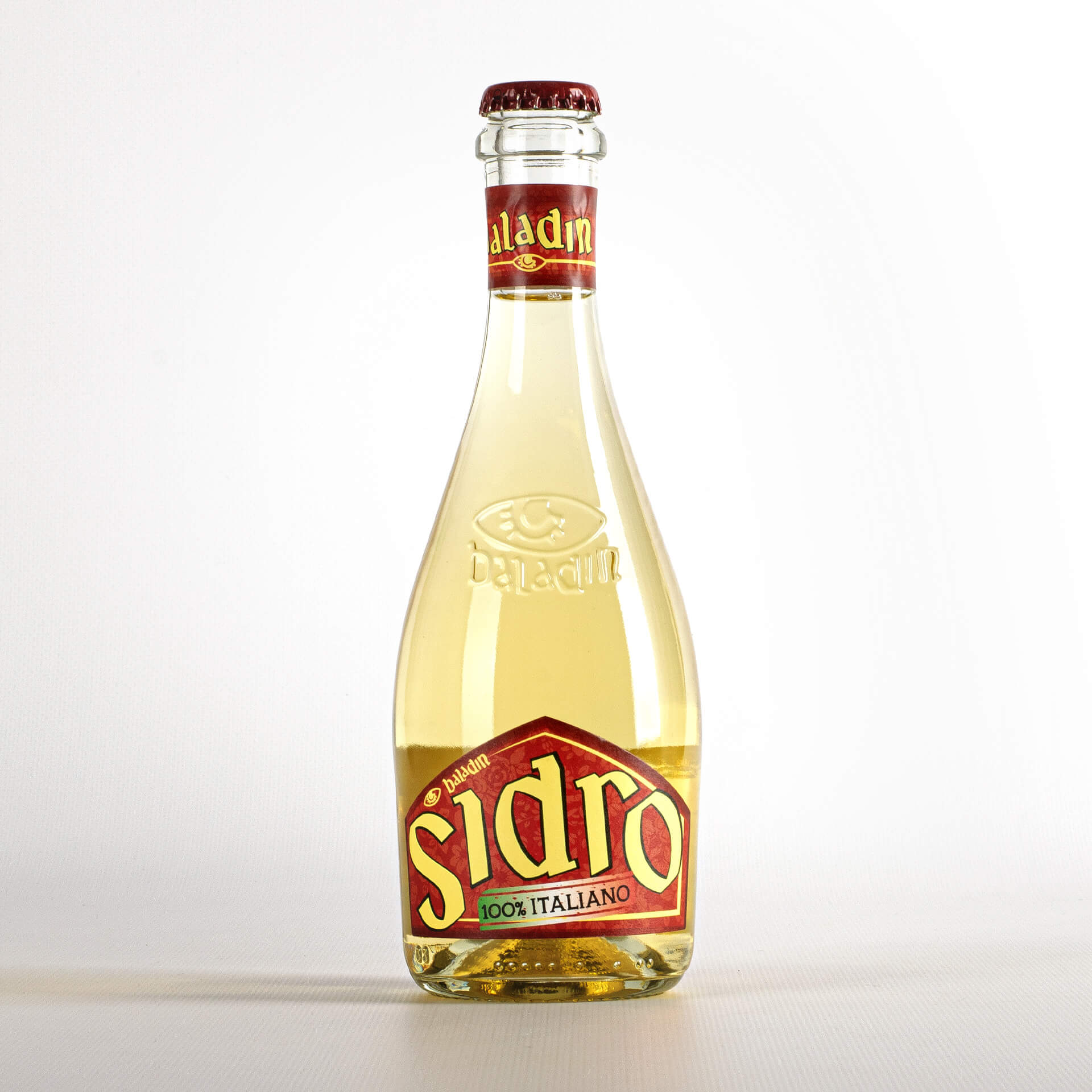 Apple Cider 25 cl Birrificio Baladin
A drink linked to the earth, to tradition and the quintessential biblical fruit, the fruit of sin… A link between the French-Belgian tradition and the typical apple juice of Piedmont, our cider is the product of the spontaneous fermentation of apples.
€4.00 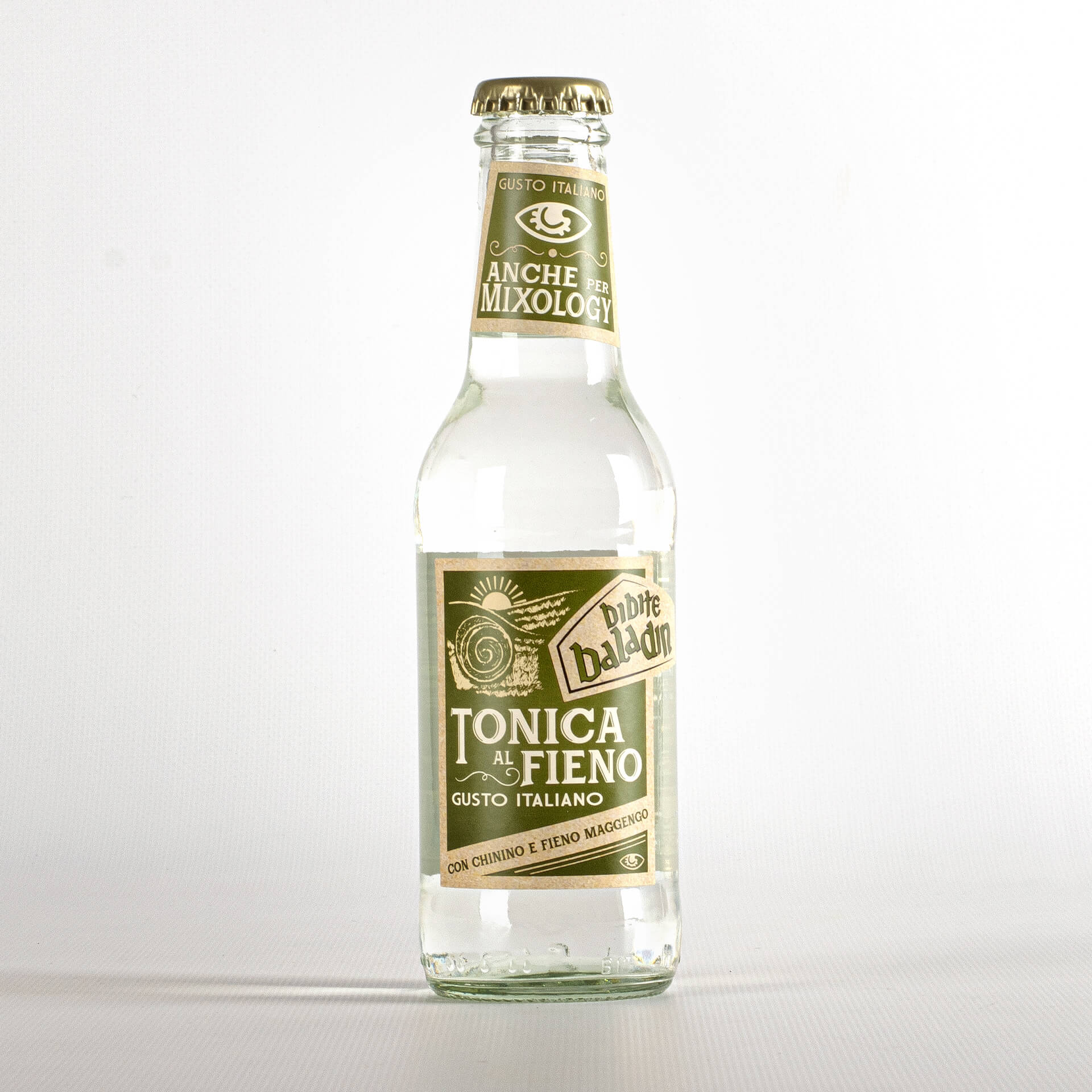 Tonica & Fieno Baladin 0,20ml Birrificio Baladin
Inspired by classic Indian tonic water, it is characterized by flowery and herbaceous notes given by the skillfully measured use of spring hay - the one that is cut first and is the most fragrant – from the Alps around Cuneo.
€1.85 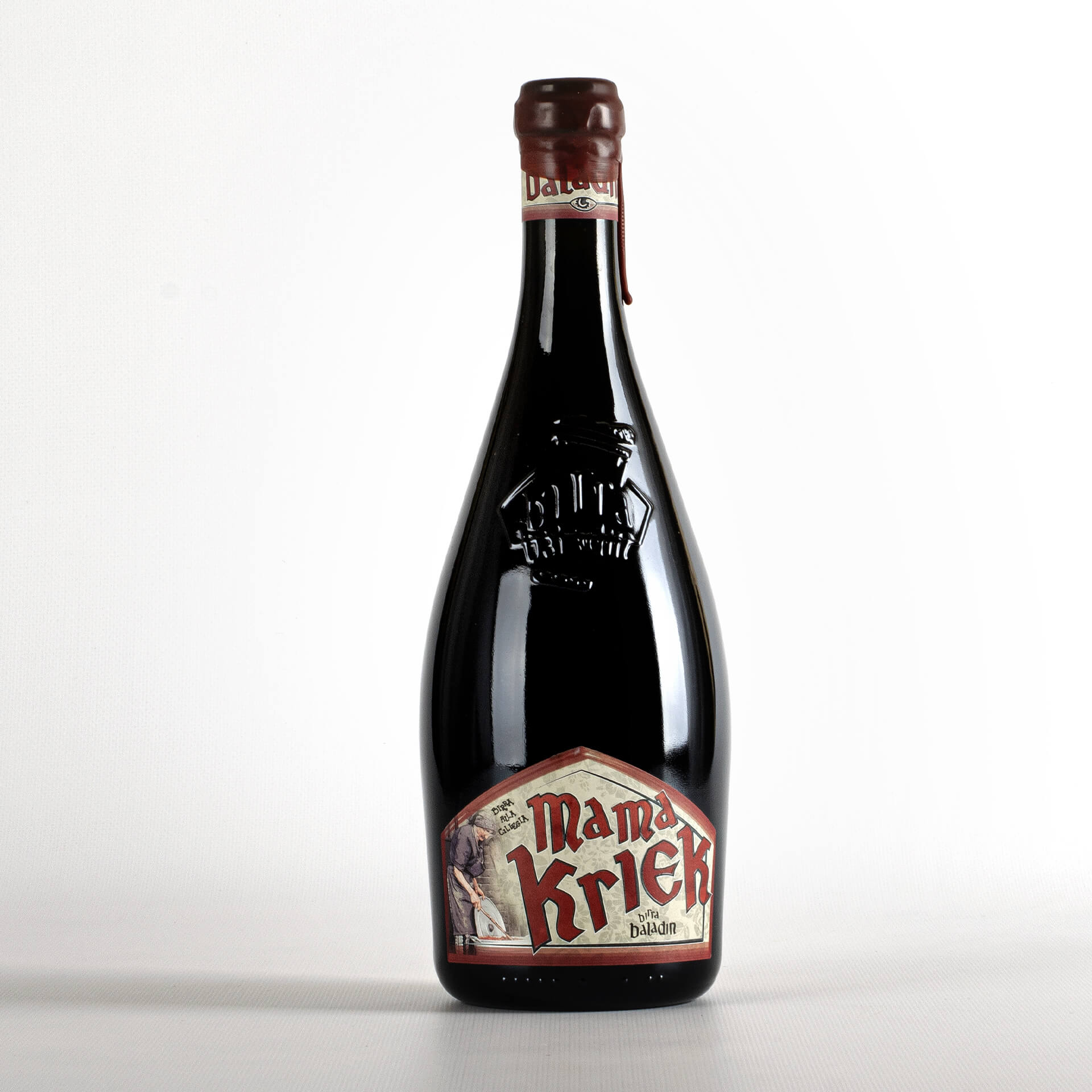 Mama Kriek - Birra Baladin Birrificio Baladin
Mama Kriek is inspired by classic Kriek, the Belgian fruity beers. Perfect as an aperitif, it carries a deep connection to the earth, as a symbol of birth and the origin of everything – shown here by the presence on the label of Teo’s mother. “Mamma Maria” has been a key presence since the birth of this beer, when she patiently cleaned sour griotta cherries for the first production batches.
€11.00

Super Bitter 33cl - Amber Baladin Beer Birrificio Baladin
Super Bitter, it undoubtedly follows the current trend of bitter beers, but without taking it too far! Super Bitter has sure plenty of hoppy scents - given by the generous use of a particular type of American hops called “Amarillo” - but it remains true to its Baladin identity and strikes a perfect balance with notes of caramel, dried fruit (just a hint) and the bitterness of the hops.Super Bitter, just as its famous “big sister” (if not more), will entice you to spend time with others and socialize.
€4.00 €3.25
-19% 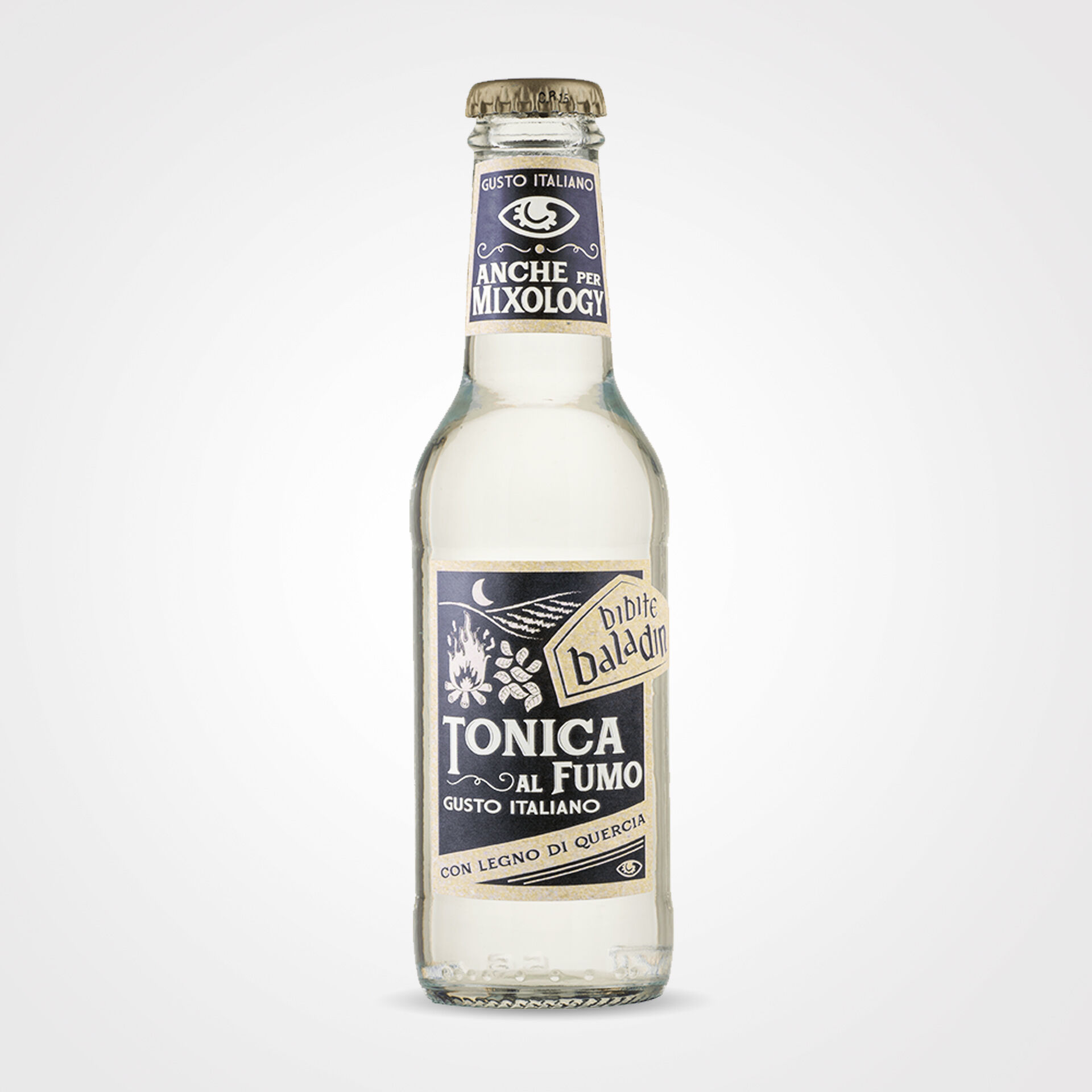 Tonica al Fumo 20 cl Birrificio Baladin
The Baladin Smoke Tonic is designed for palates who love smoky notes. This original aromatic profile is given by the use of a toasted oak wood extract, in order to complete the smoky note with an intriguing woody profile.
€1.85

Wayan 33cl - White Baladin Beer Birrificio Baladin
5 cereals: barley, spelt, wheat, rye and buckwheat. 9 spices, of which 5 peppers, in a renewed mix. Fizzy and refreshing, with a light, slightly cloudy colour.Its aromas are reminiscent of the countryside and sun-soaked citrus orchards, and perfectly combine with the notes of orange blossoms, pear and bergamot, present in the recipe.
€4.00 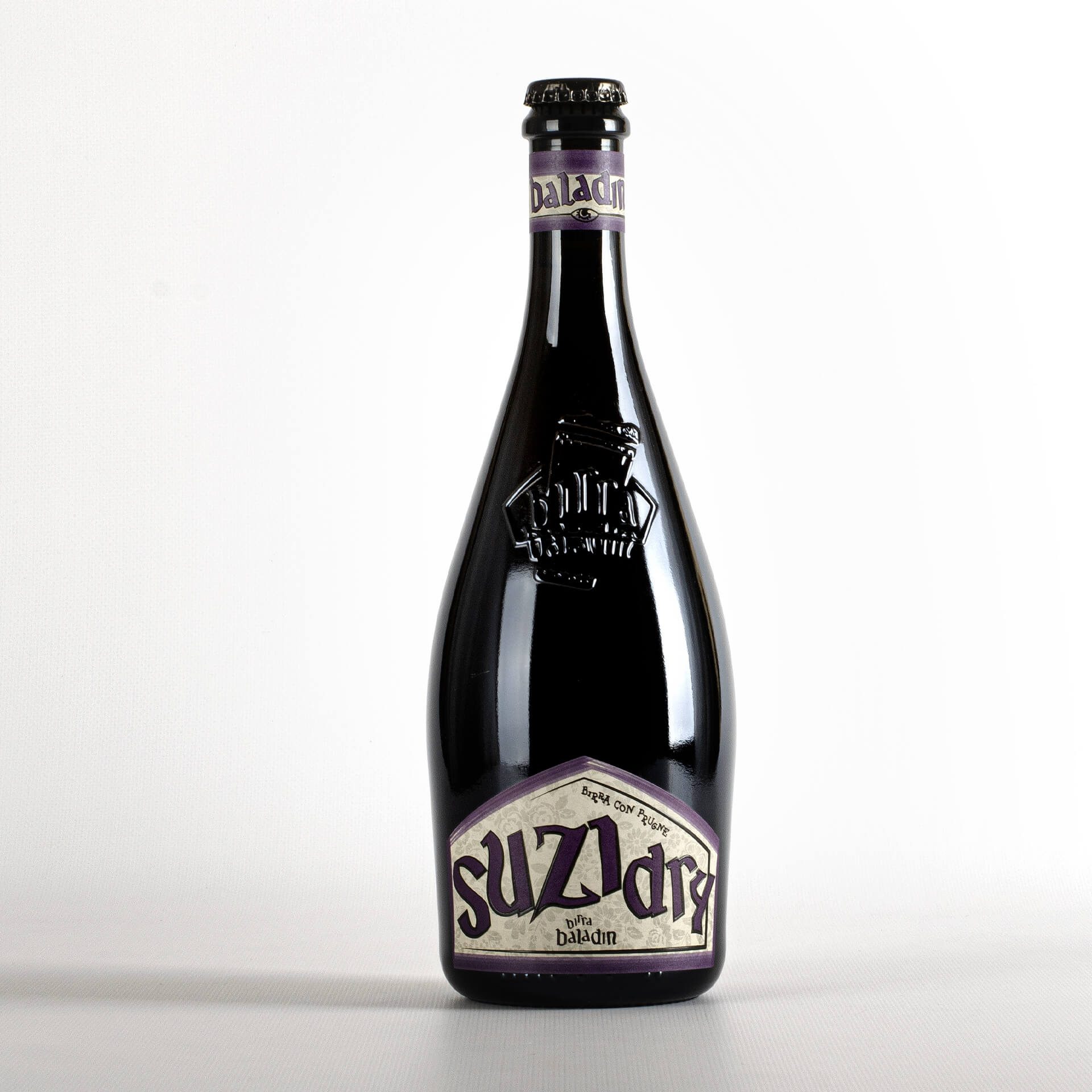 Suzi Dry - Birra Baladin Birrificio Baladin
Its scent is full of gentle and fresh notes of white flowers and Isabella grape. Its taste is a combination of slightly winey aromas and smooth notes of plum, supported by a pleasant and light acidity which makes this beer very easy to drink and hides the alcohol content. The finish is characterized by hints of pepper which perfectly blend with the mild cereals used in the production process.
€10.50 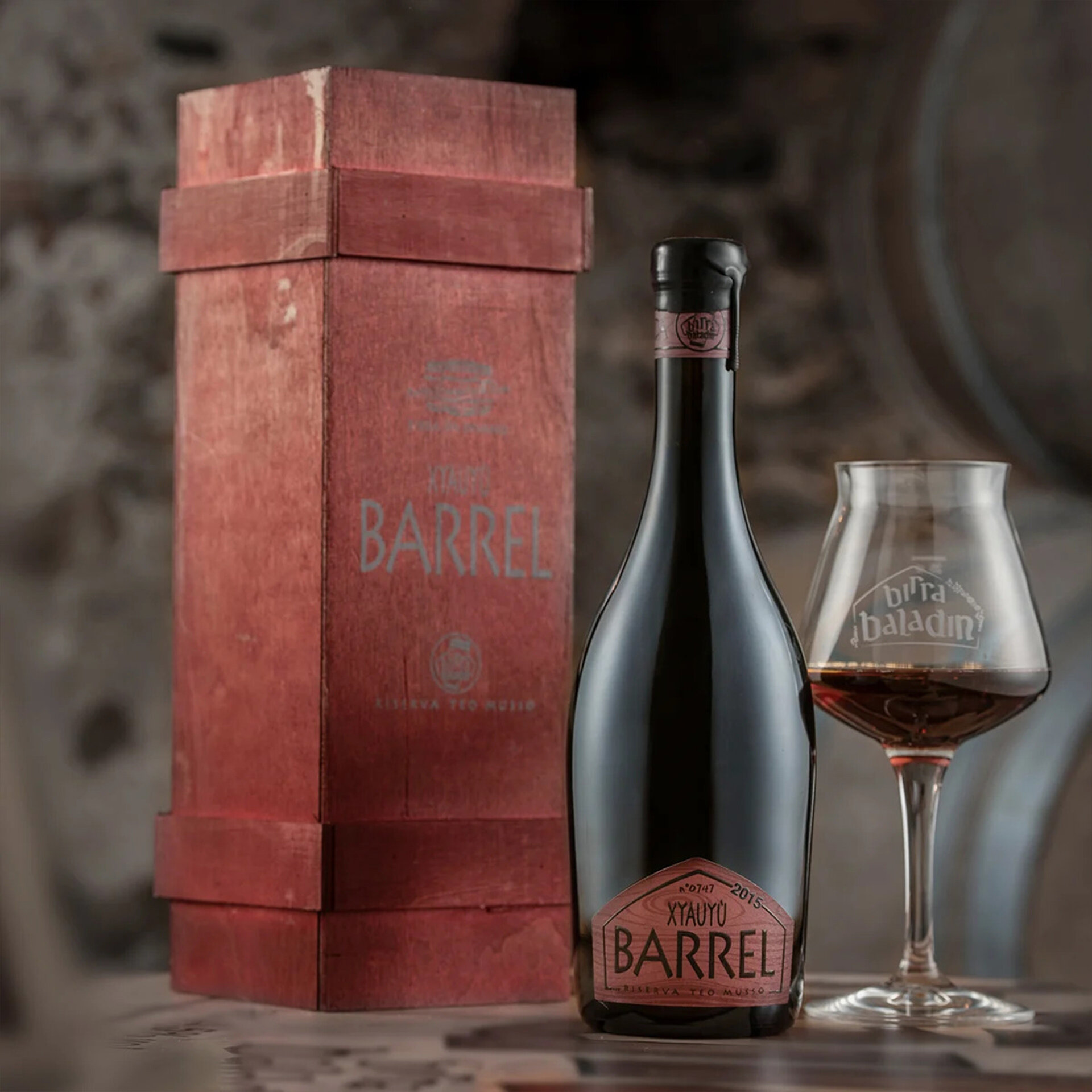 Xyauyu Barrel 0,50 cl con cassetta in legno Birrificio Baladin
While sipping it, the tastes of caramel, vanilla and fruit in syrup emerge. They blend harmoniously with the typical warmth of this barley wine with surprising notes of the best rums, in whose disused barrels Xyayù Barrel is aged.
€36.70 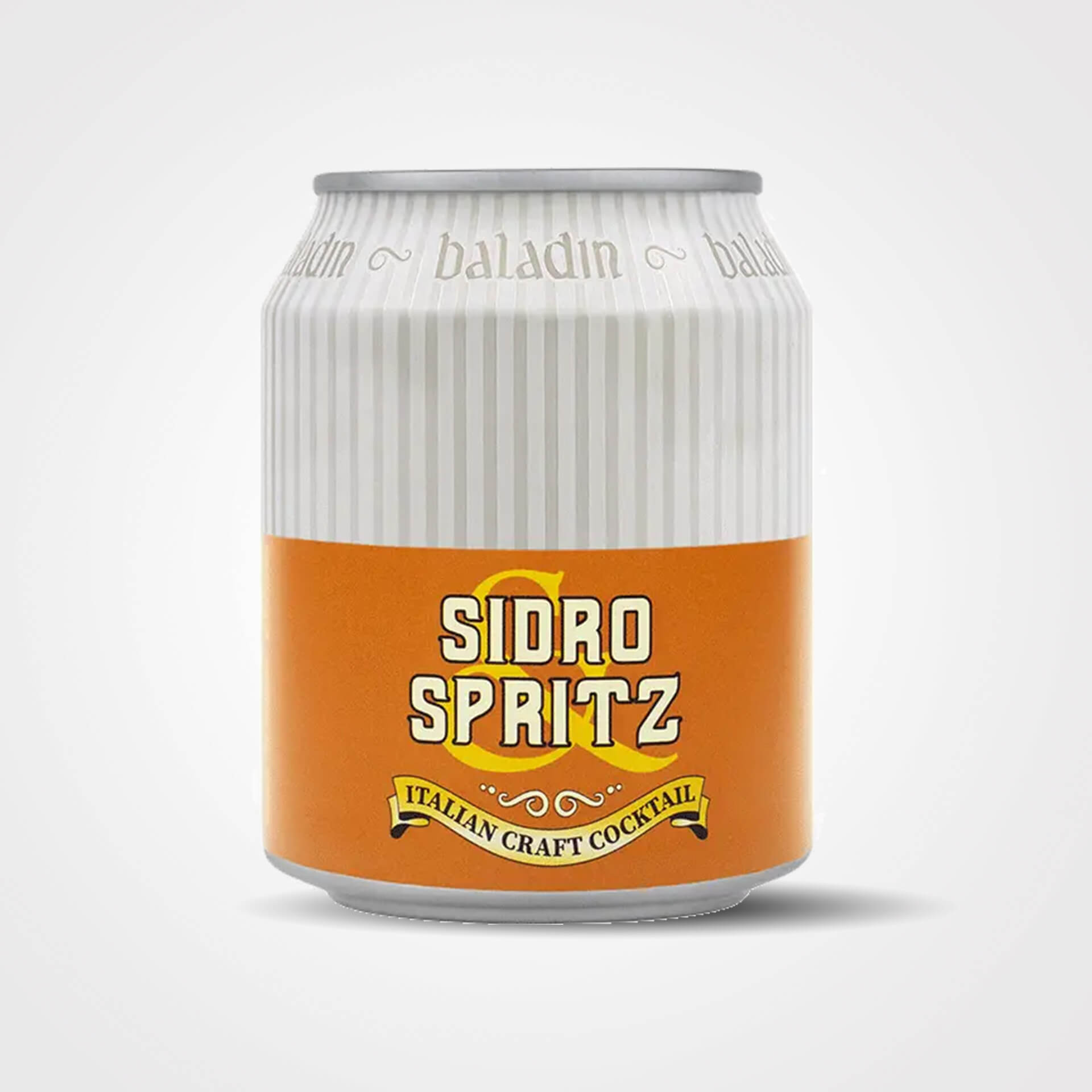 Cider and Spiritz Birrificio Baladin
The Baladin Brewery’s Cider Spritz is a very popular cocktail and ideal for aperitifs. The Cider Spritz, orange and honey, has bitter, spicy and citrus tasting notes. The nose has notes of Mandarin, bitter and apple. The apples used for the production of Cider Spritz are all 100% Italian.
€4.20 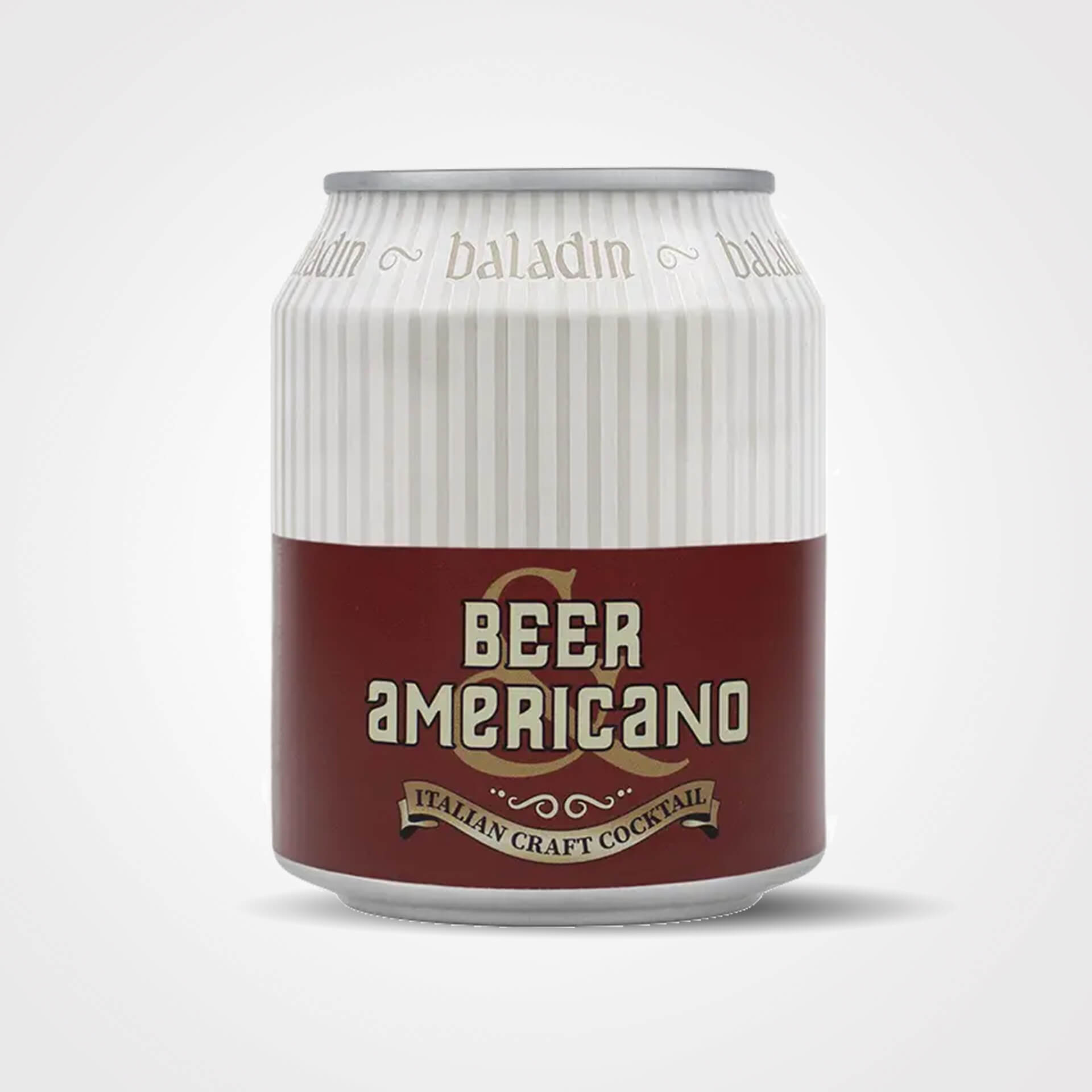 Beer Americano Birrificio Baladin
Cocktail Beer Americano is brick red and pomegranate, clear and brilliant. The nose persists with spicy notes reminiscent of vermouth and bitters, enriched by the hops sensations of Baladin 4.8 beer The palate is bitter and then leaves room for citrus notes of quinotto, hot spice, alpine herbs and mace.
€4.20

Select the country where you would like to ship