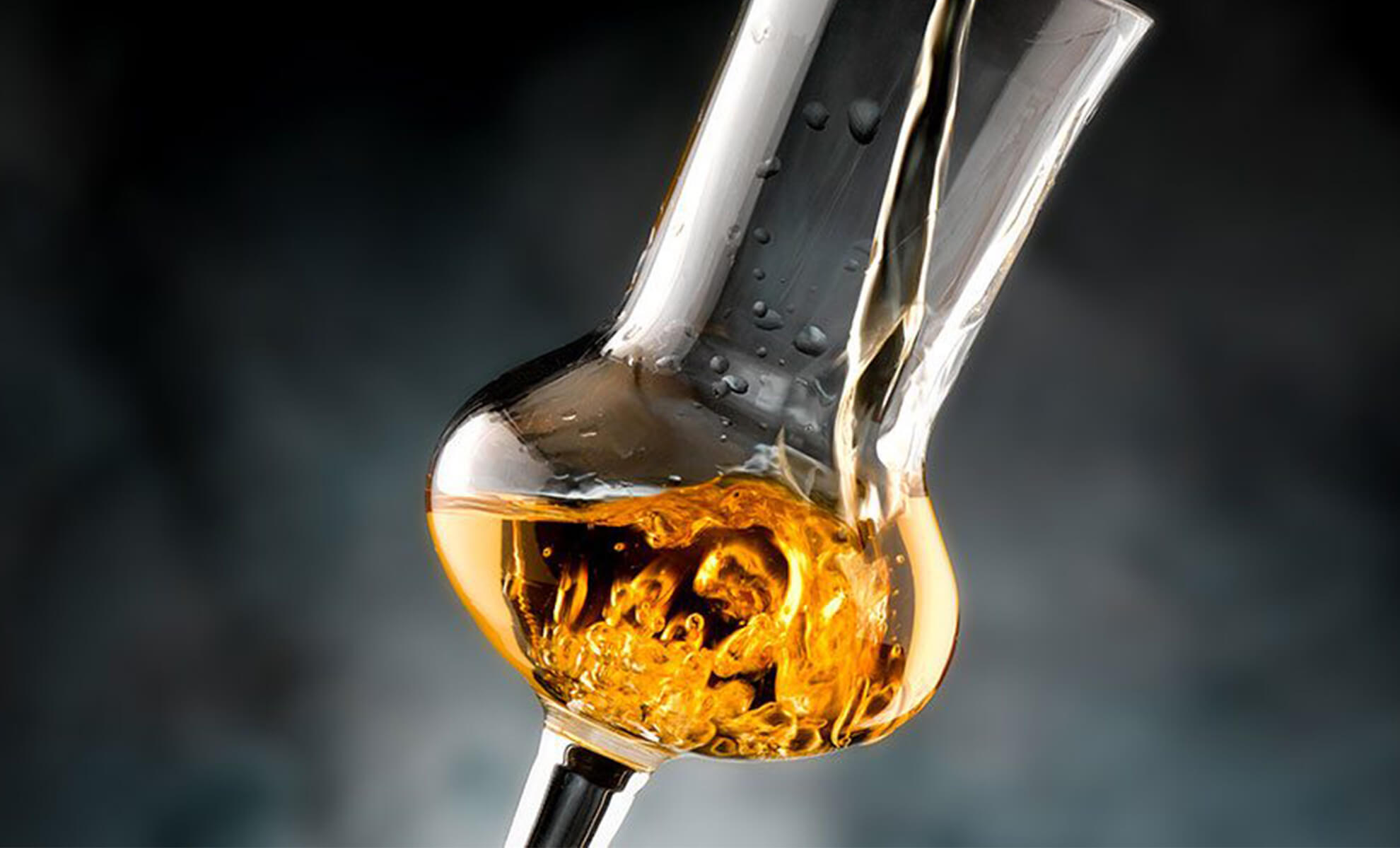 Enjoy the flavour and scent of a land rich in history and tradition, discover the grappa of the best Piedmontese distilleries, a guarantee of Shop Piemonte! 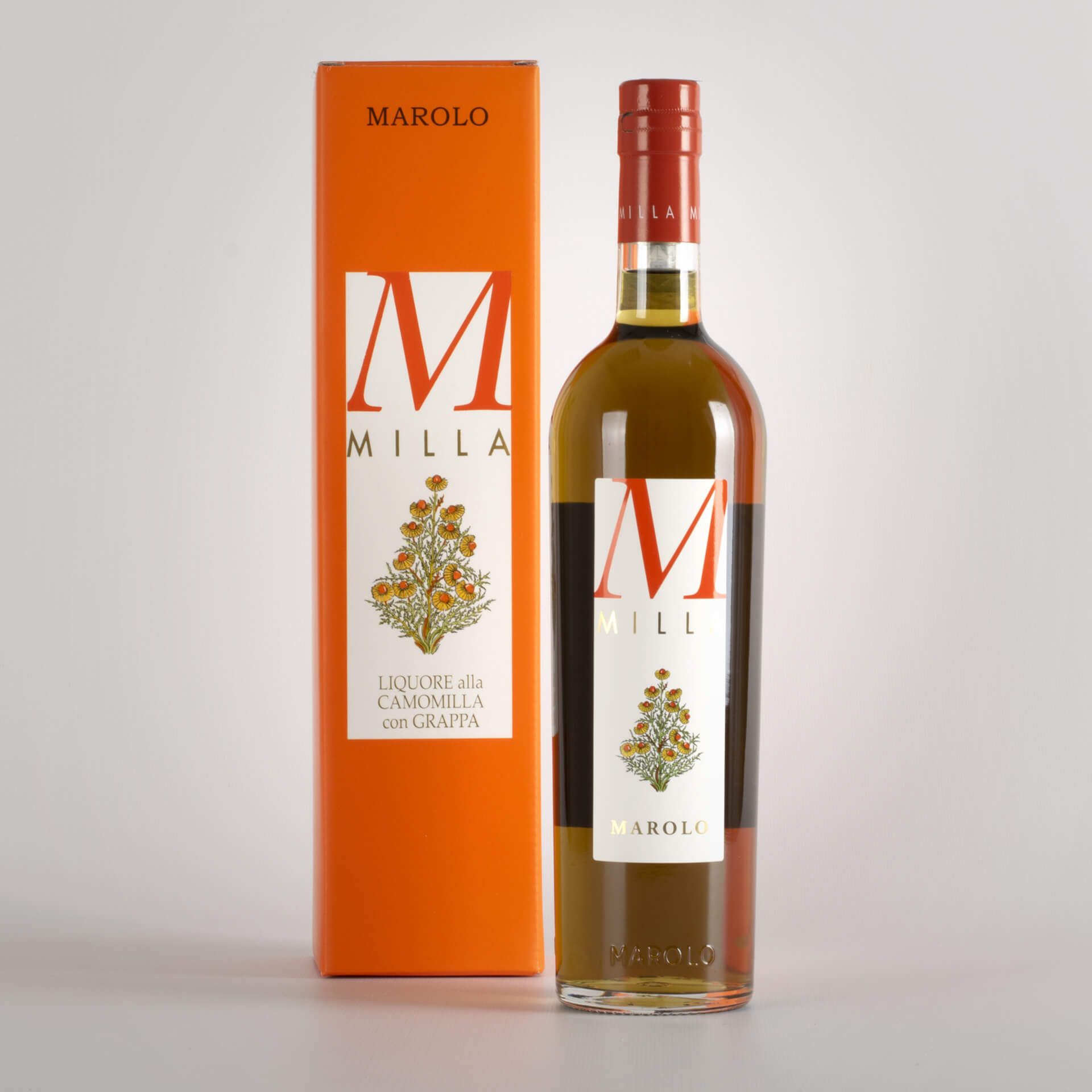 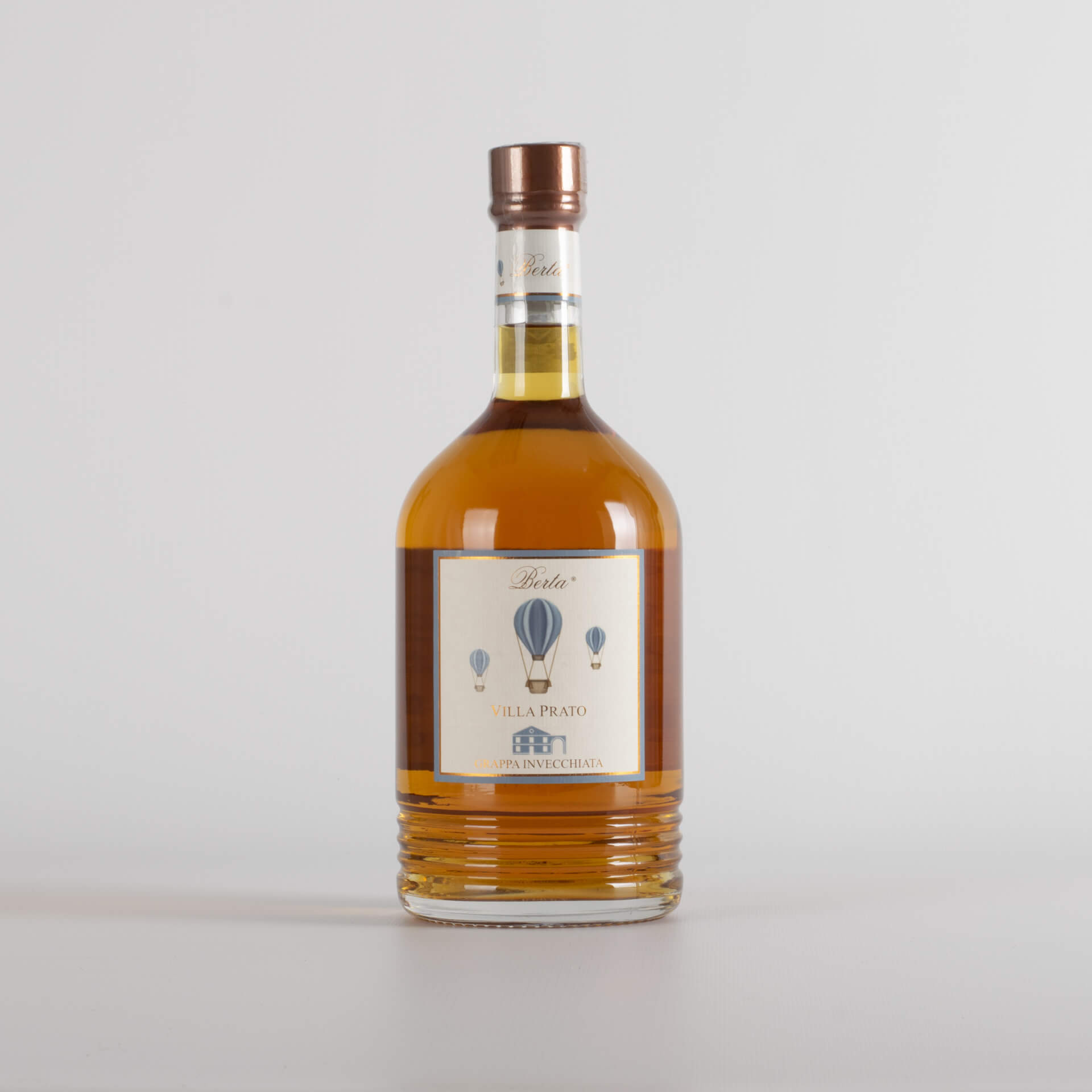 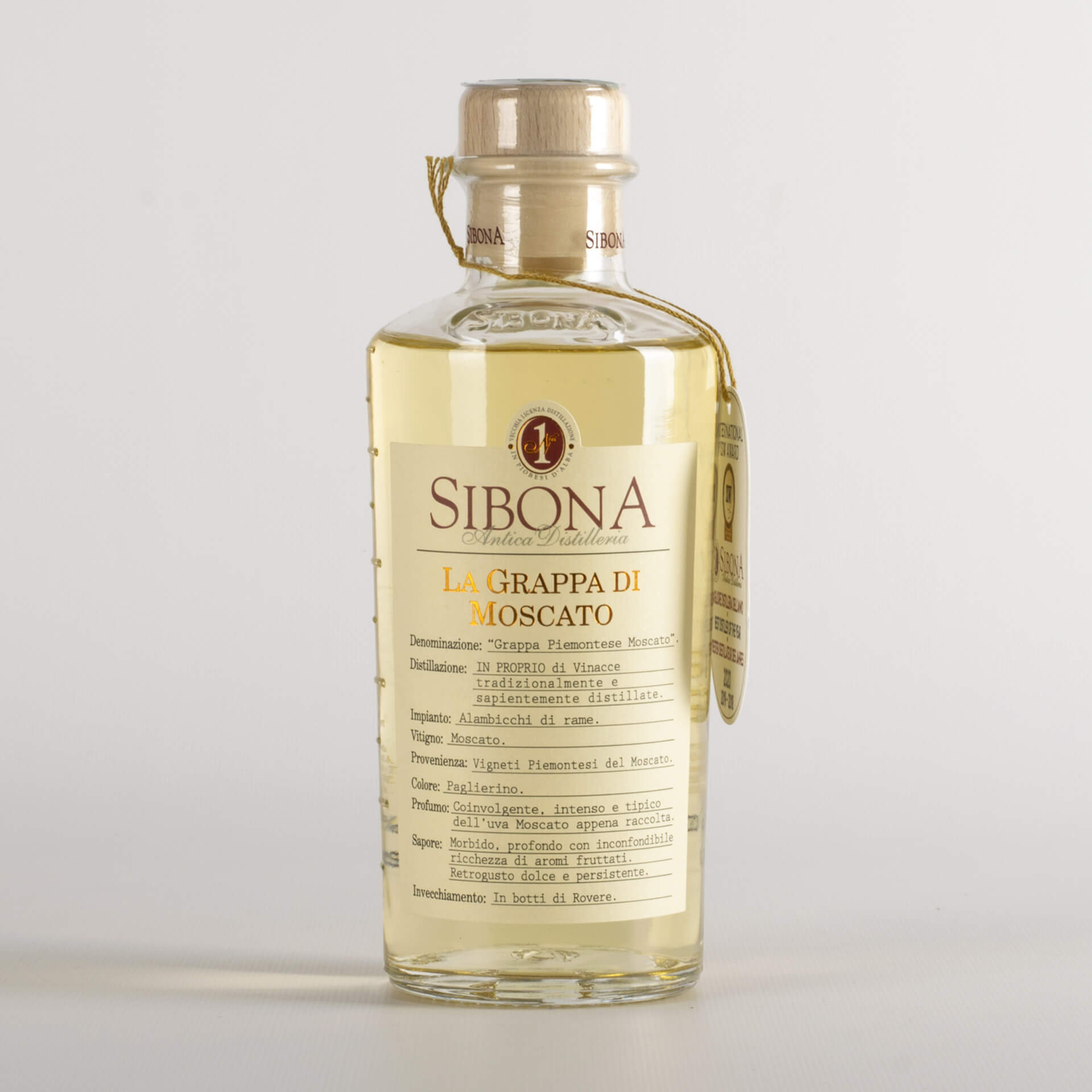 Moscato Grappa Grappa Sibona
This grappa is obtained from the pomace of the typical, well known Moscato d'Asti grapes, grown in the historic areas of Alba and Asti, by means of skilful distillation.
€17.40 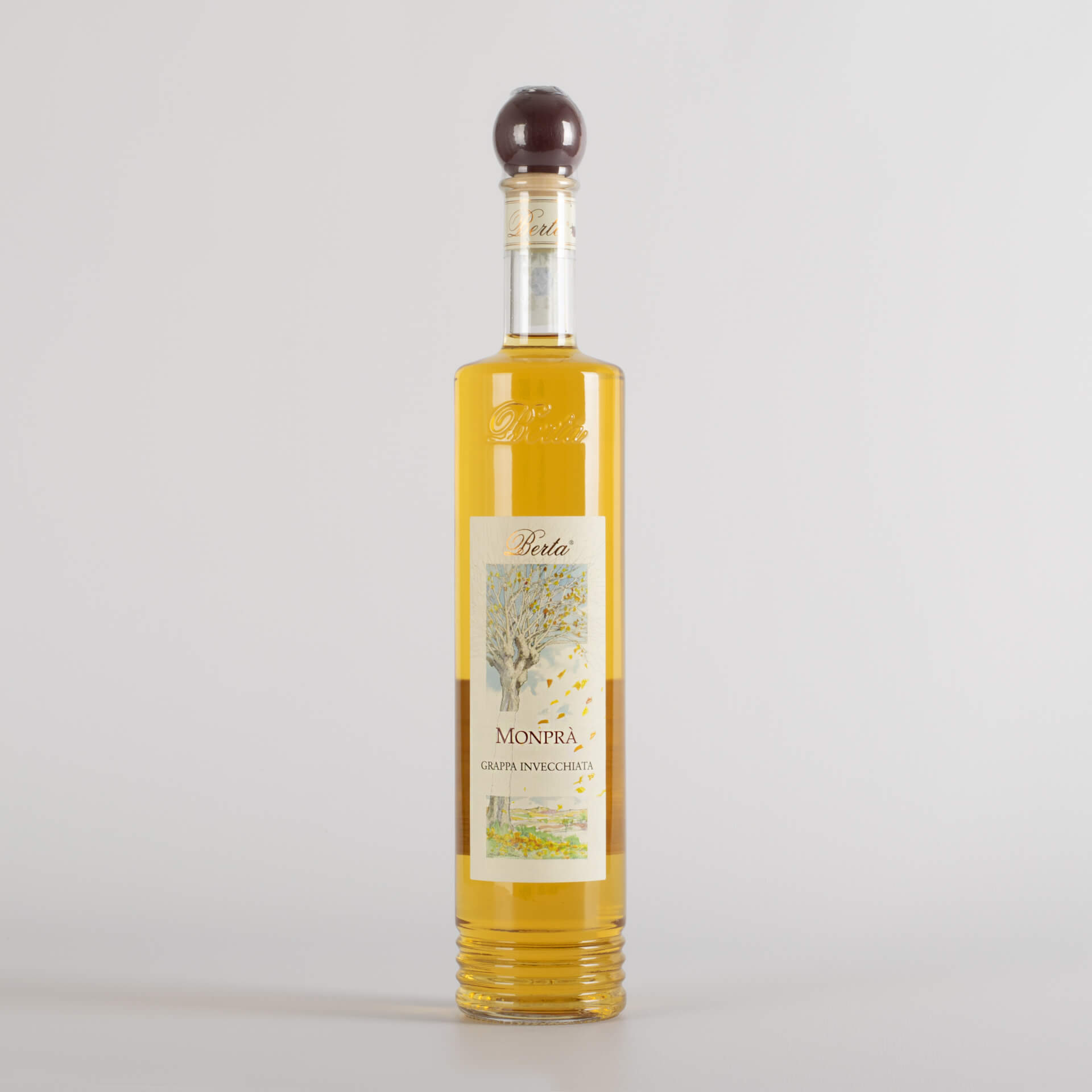 Grappa Berta Monprà Grappa Berta
This Monprà grappa made by Distilleria Berta comes from the pomace of Barbera and Nebbiolo. It is distilled with the traditional discontinuous method in copper steam boilers and it is then aged for 12 months in wood. It has an elegant, harmonious and strong flavour with hints of vanilla and cocoa.
€23.40 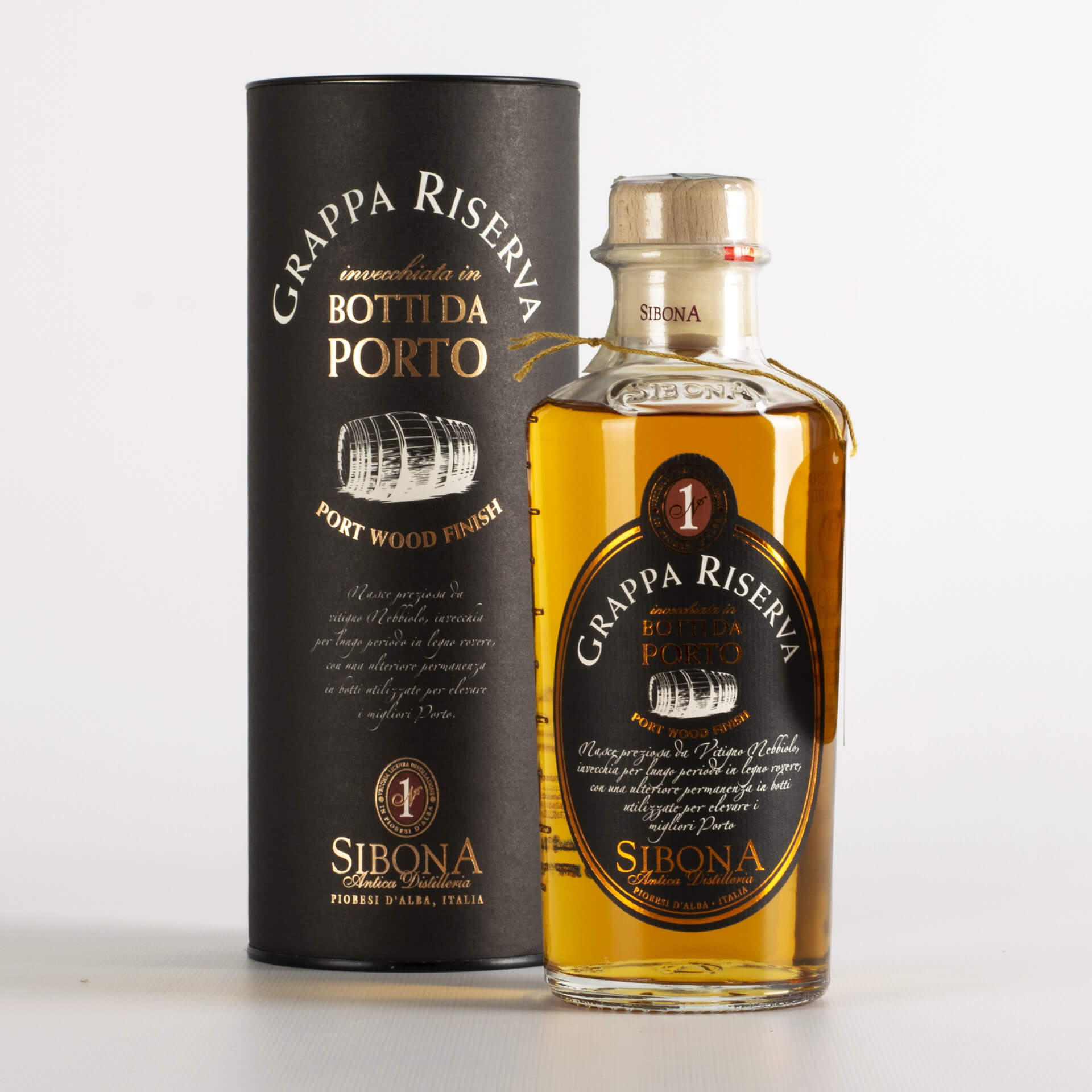 Reserve "Botti da Porto" Grappa Grappa Sibona
This special Reserve grappa of Nebbiolo already matured, for a long period (2years), in oak barrels, follows a further 24 months in wooden-barrels, bought in Portugal and which have already been used, previously for "Vintage Port" from one of the most prestigious canteens. The fragrance is delicate and the taste is unique, full and elegant with an after-taste of fruit, which re-calls that of the Port already contained previously in these barrels.
€24.90 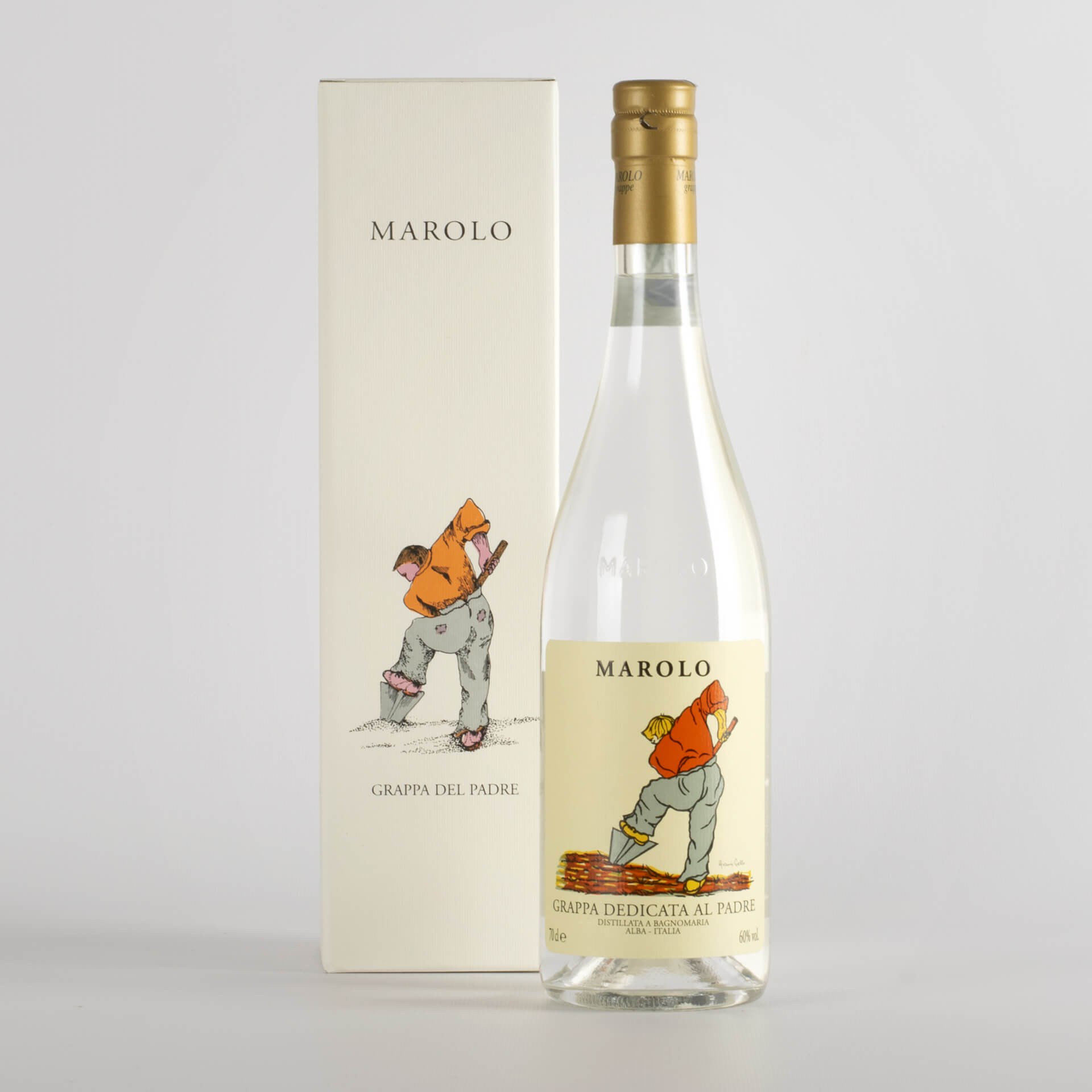 Grappa Dedicated to the Father Grappa Marolo
This Grappa dedicated to the fathero of distillery Marolo is made with the red marcs of the grapes of Roero. It is the grappa with the highest alcoholic content. White, with armonic scent, full-bodied and warm taste.
€38.80 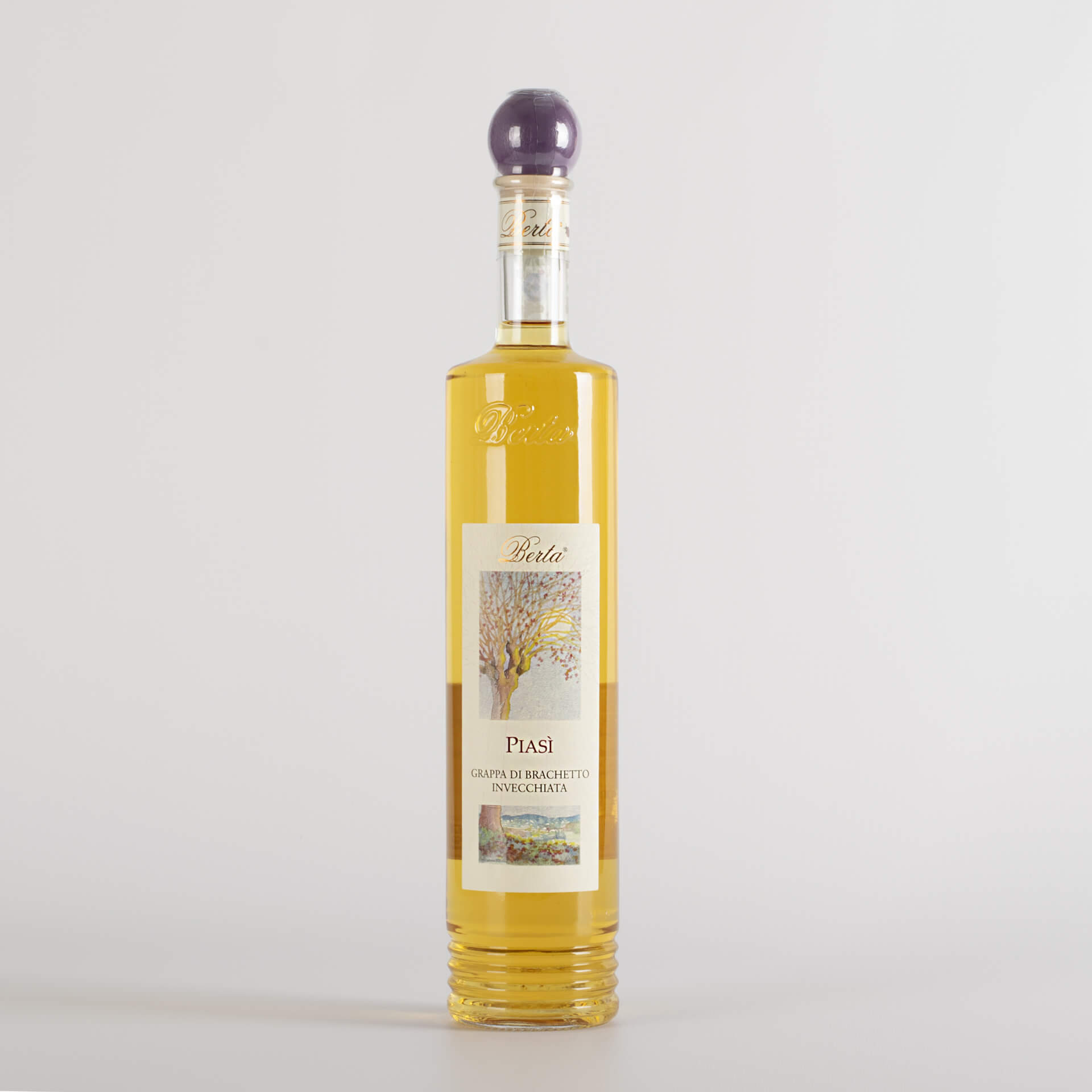 "Piasì" Grappa Berta Grappa Berta
The "Piasì" grappa comes from the "Brachetto" grape skins. It is distilled in the traditional way in vapour stills of copper and then rests for 12 months in oak barrels of Slavonia.  Expresses an elegant fragrance, harmonious and pronounced; the taste is very soft and smooth, with hints of vanilla and roses.
€23.40 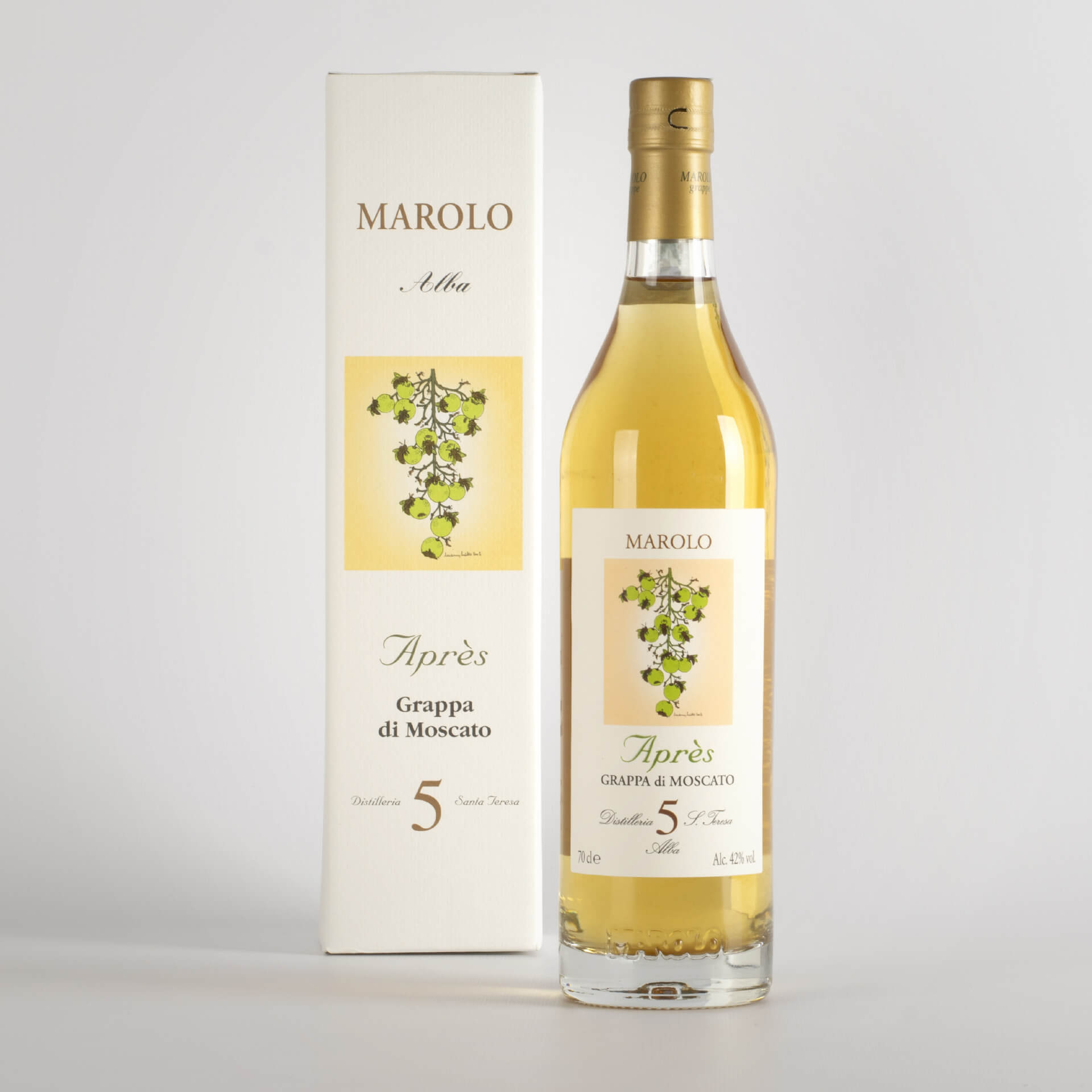 Après Grappa aged for 5 years Grappa Marolo
The Moscato Grappa Après is refined for 5 years in wooden barrels from Sicily, which previously contained the famous sweet wine Moscato di Pantelleria. This explains why has a deep amber colour, an intense aromatic flavour and a round slightly almondy taste.
€29.80 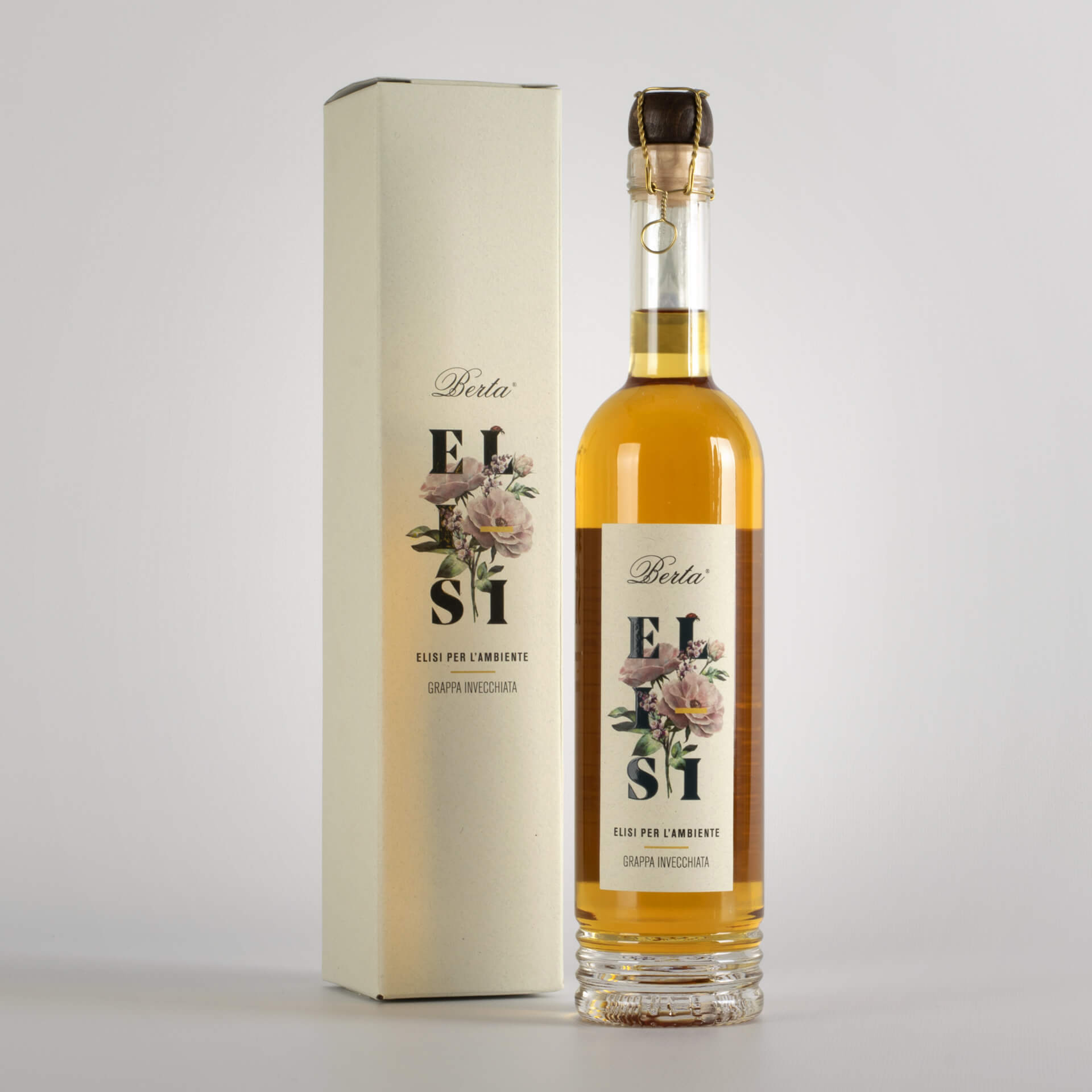 "Elisi" Grappa Berta Grappa Berta
This grappa is a result of an attentive selection of grappe produced and aged over the last few years in different wooden-barrels. The assemble of different vintages and of the different skins transfer elegance to this grappa, the complexities of fragrances, and the emotions that only great distillations of the world can transmit.  It expresses a complex, ample fragrance with hints of cacao and cherries. The taste is rich and round. The sensations are confirmed in the fragrance.
€23.00

Grappa Berta Composita Grappa Berta
The Primagioia grappa was created by skilfully blending together Young Grappa , Aged Grappa, Wine Grape Spirit and Fruit Grape Spirit. The components of the Grappa are mixed and aged for 12 months in different wooden barrels. It is not a young nor aged grappa, nor a brandy, it is a fruit distillate, but it is far better than all the others. The recipe is top secret and jealously guarded. It has a layered, pervasive, caressing aroma and a distinctive character. A perfect balance of sensations, in which tobacco, cocoa and vanilla stand out. The flavour is rich, and mouth-filling, confirming the seductive sensations in its aroma.
€39.00 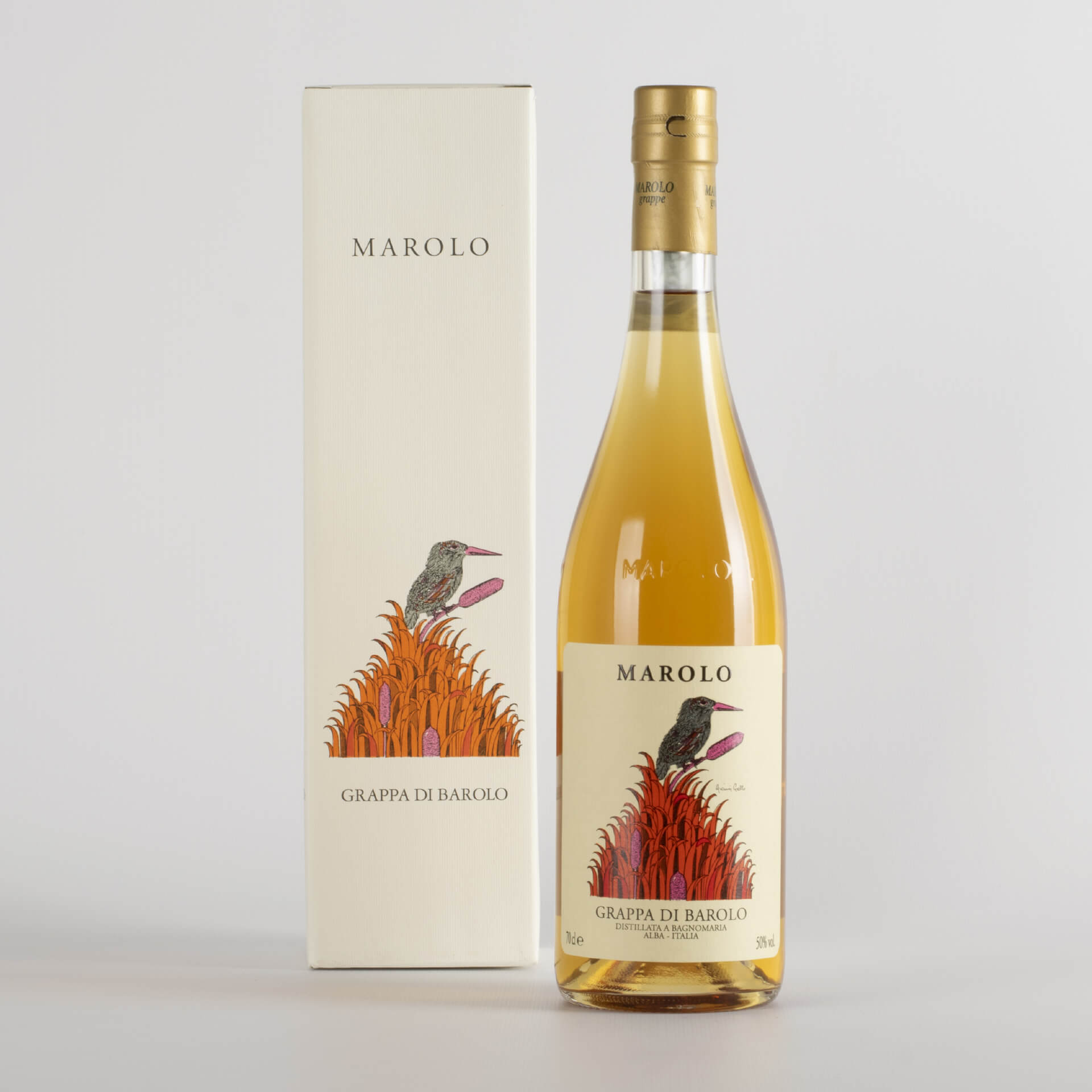 Grappa Barolo (barriques) Grappa Marolo
Delicious Grappa Barolo is made with the marcs of Nebbiolo grape for Barolo and aged in barrels for 4 years. Full and rich perfumes with shades of toasted vanilla. Strong and warm taste.
€31.50 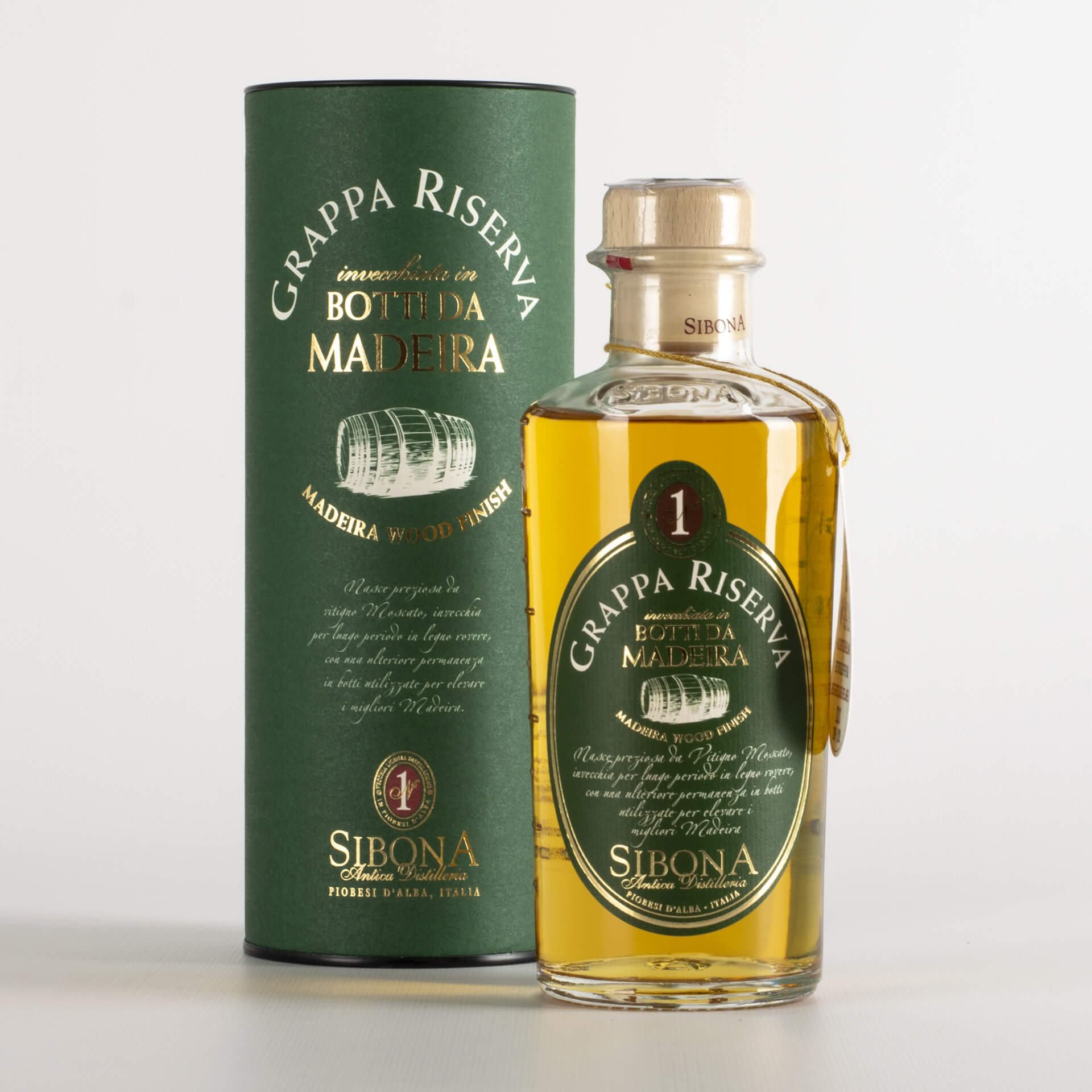 Reserve "Botti da Madeira" Grappa Grappa Sibona
This special Reserve grappa of Moscato and other Piedmontese grape-skins already matured, for a long period (2years), in oak barrels, follows a further 24 months in wooden-barrels, bought from the Island of Madeira, and which have already been used, previously for "Madeira" from the most prestigious canteens. The particular refinement in the Madeira barrels, already used for Whiskey, we have experimented in a new way for the Grappa with exceptional results from a quality point of view.  The fragrance is round and fruity and the taste is rich and elegant with a flowery after-taste, which re-calls that of the Madeira already contained previously in these barrels.
€24.90 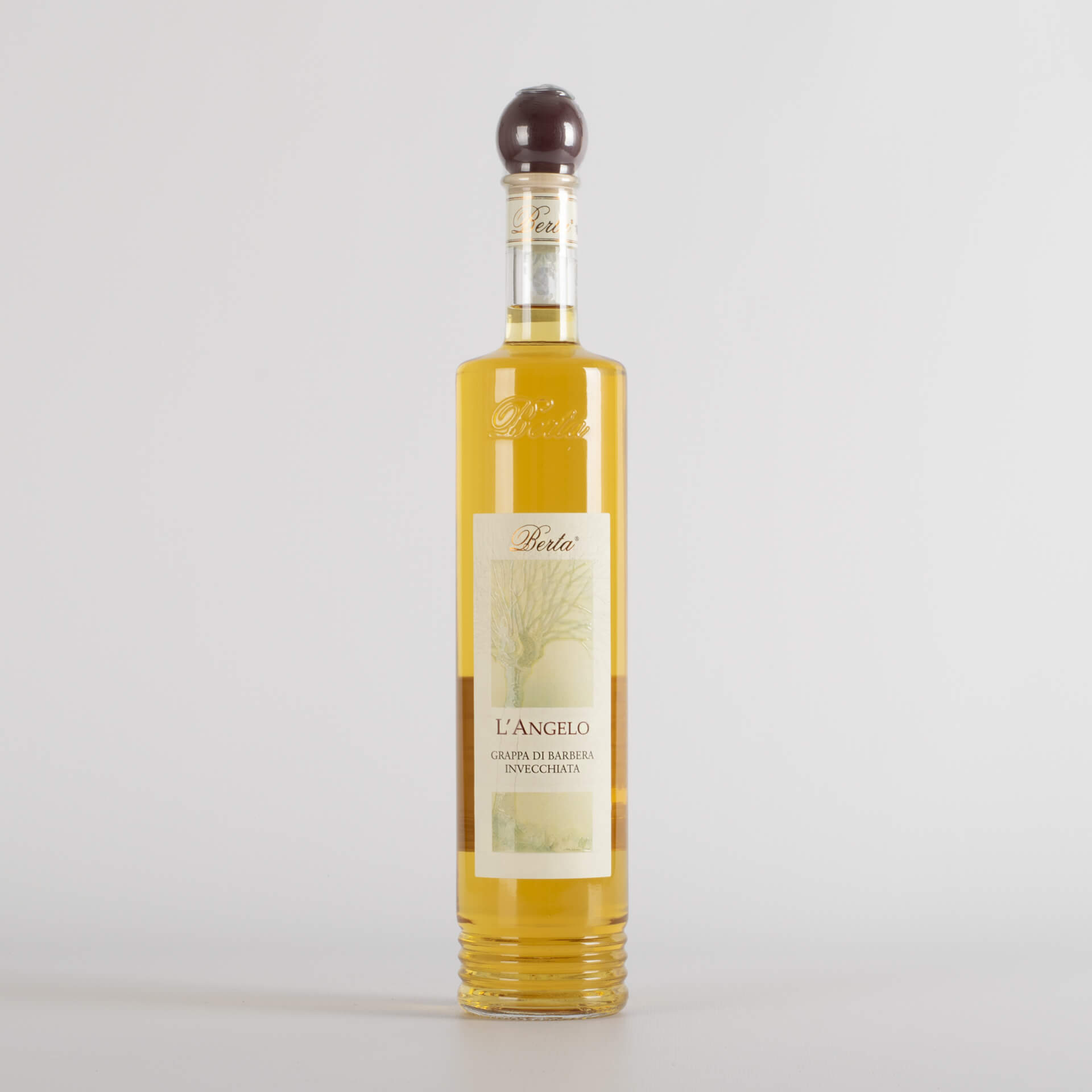 "L'Angelo" Grappa Berta Grappa Berta
The grappa "L'Angelo" of Berta comes about for the distillation of the grape-skins which come from the typical zones of Barbera, selectioned by the best producers. It is characterized by its soft round taste, hues of vanilla and cacao.
€22.50 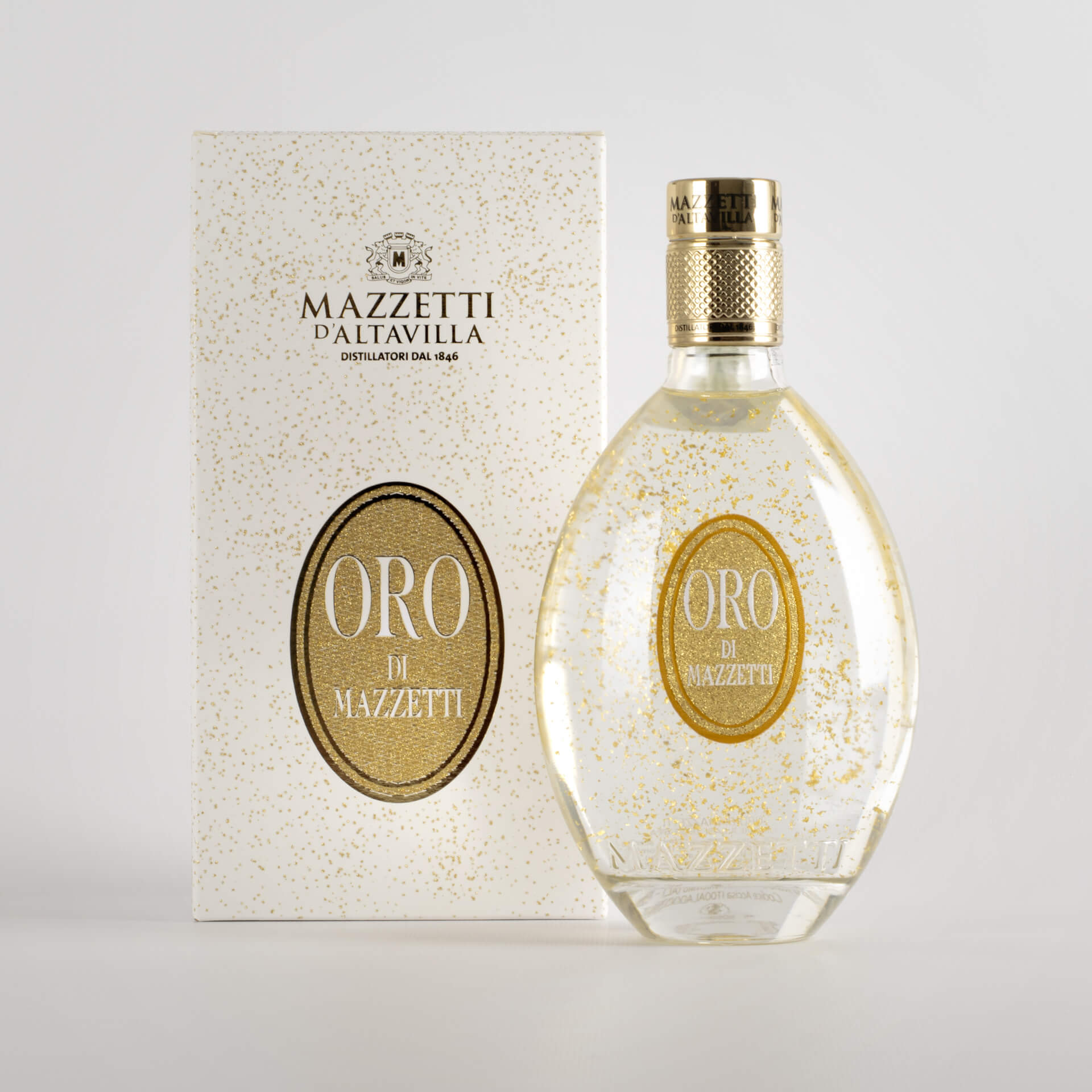 Gold Mazzetti based liqueur Grappa Mazzetti - with case Grappa Mazzetti d'Altavilla
Oro Mazzetti is a very special liquor based on grappa, with the aromatic notes of grapes and micro flakes of 23 carat edible gold. Gold, a noble metal representing eternal youth and charm, has always been an object of desire and is nowadays still used in homeopathy.
€25.50 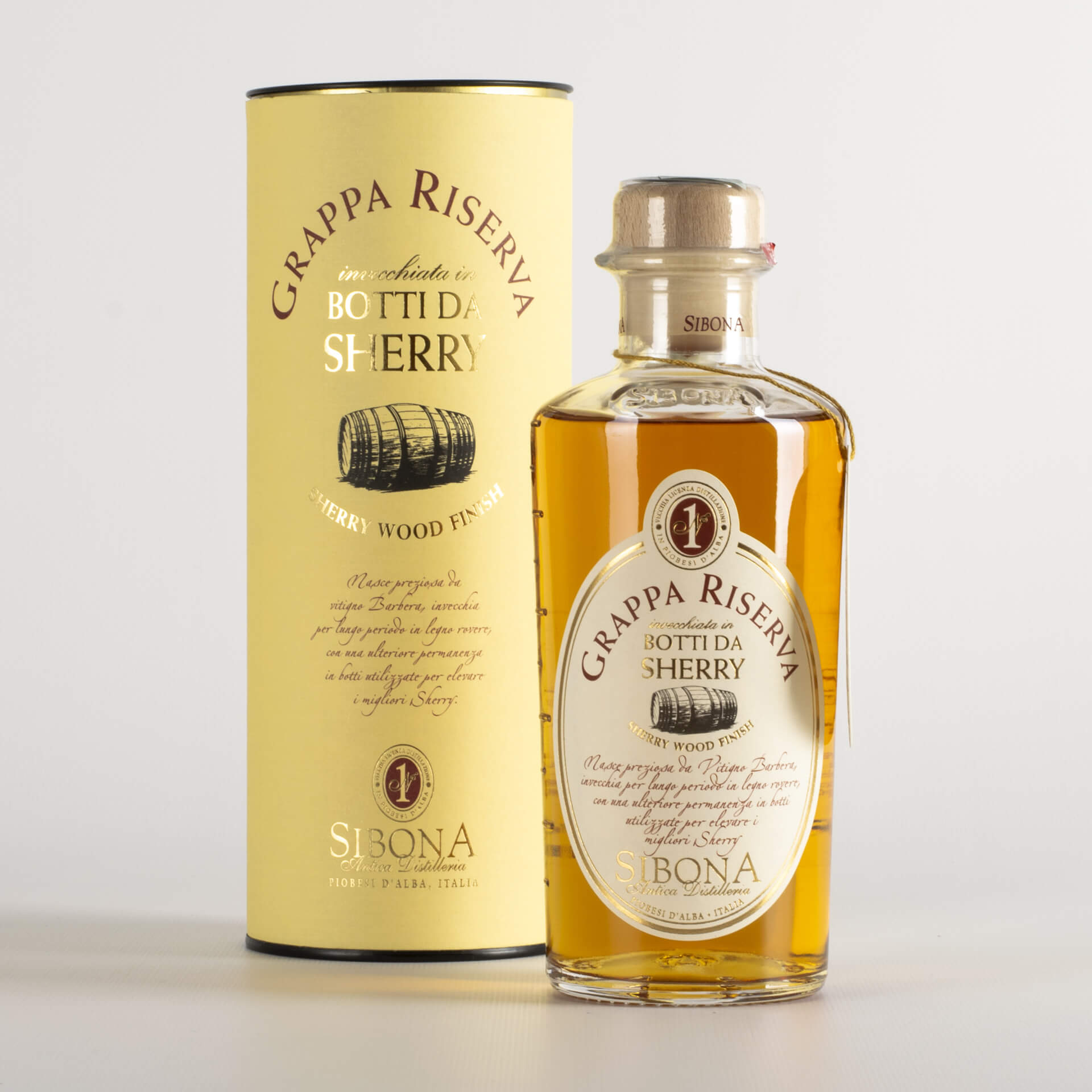 Reserve "Botti da Sherry" Grappa Grappa Sibona
This special Reserve grappa of Barbera already matured, for a long period (2years), in oak barrels, follows a further 24 months in wooden-barrels, bought in Spain and which have already been used, previously for "Sherry" from one of the most prestigious canteens. The particular refinement in the Sherry barrels, already used for Whiskey, we have experimented in a new way for the Grappa with exceptional results from a quality point of view.  The fragrance is intense and characteristic and the taste is elegant, round with a likable after-taste, which re-calls that of the Sherry already contained previously in these barrels.
€24.90 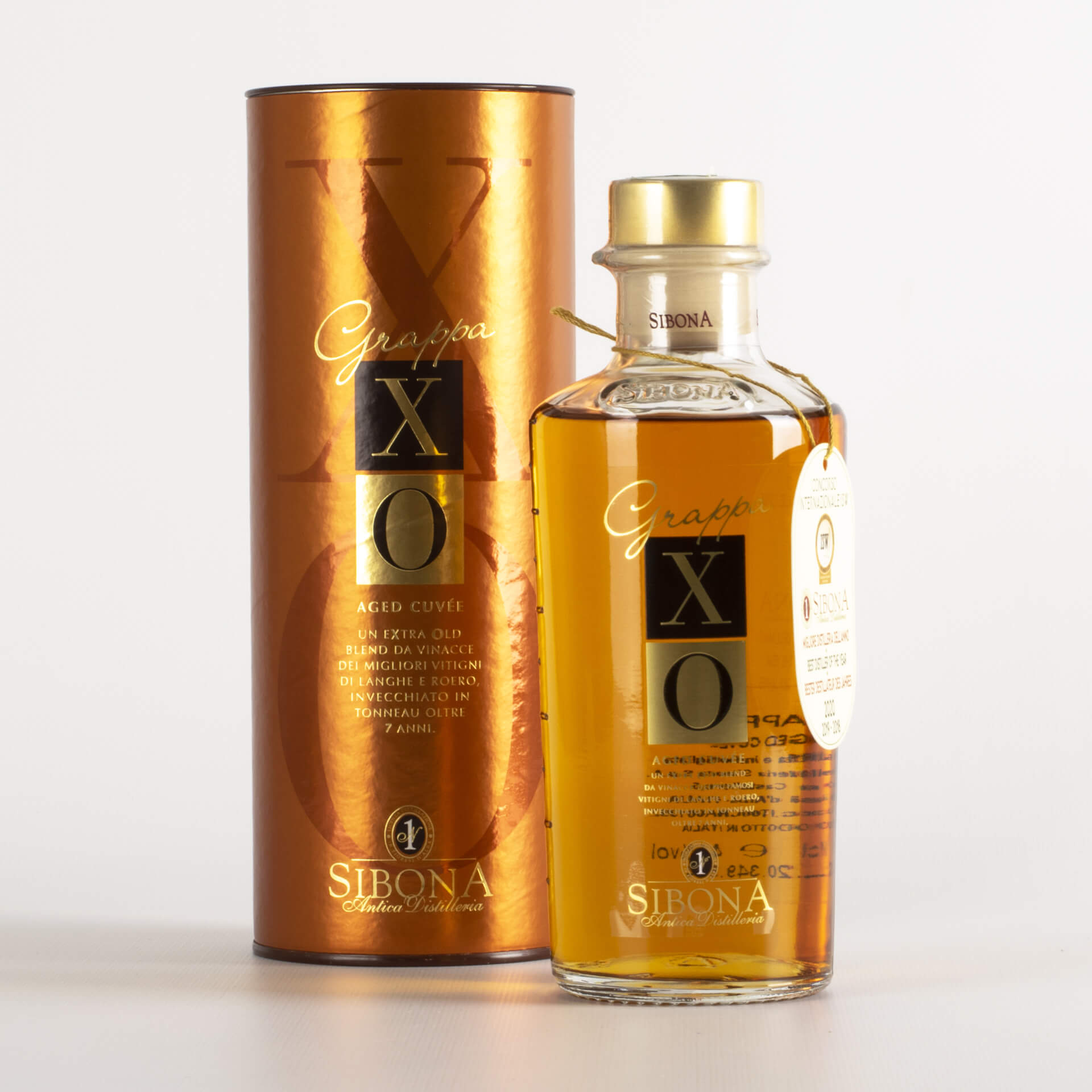 Grappa XO Aged Cuvée Extra Old Grappa Sibona
XO means “extra old”, this is the name given to the best distilled spirits provided that they are aged in wooden barrels for at least six years, after which they reach the perfect maturation. The XO Sibona project was started several years ago with the careful and skilful selection of limited quantities of the best pomace (skins, pulp, seeds and stems) of the most renowned grape varieties of the Langhe and Roero, such as the Nebbiolo (used to produce the Barolo and Barbaresco) and the Barbera. After a careful distillation these grapes gave origin to a unique blend in the world of grappas, a special cuvée.
€30.60 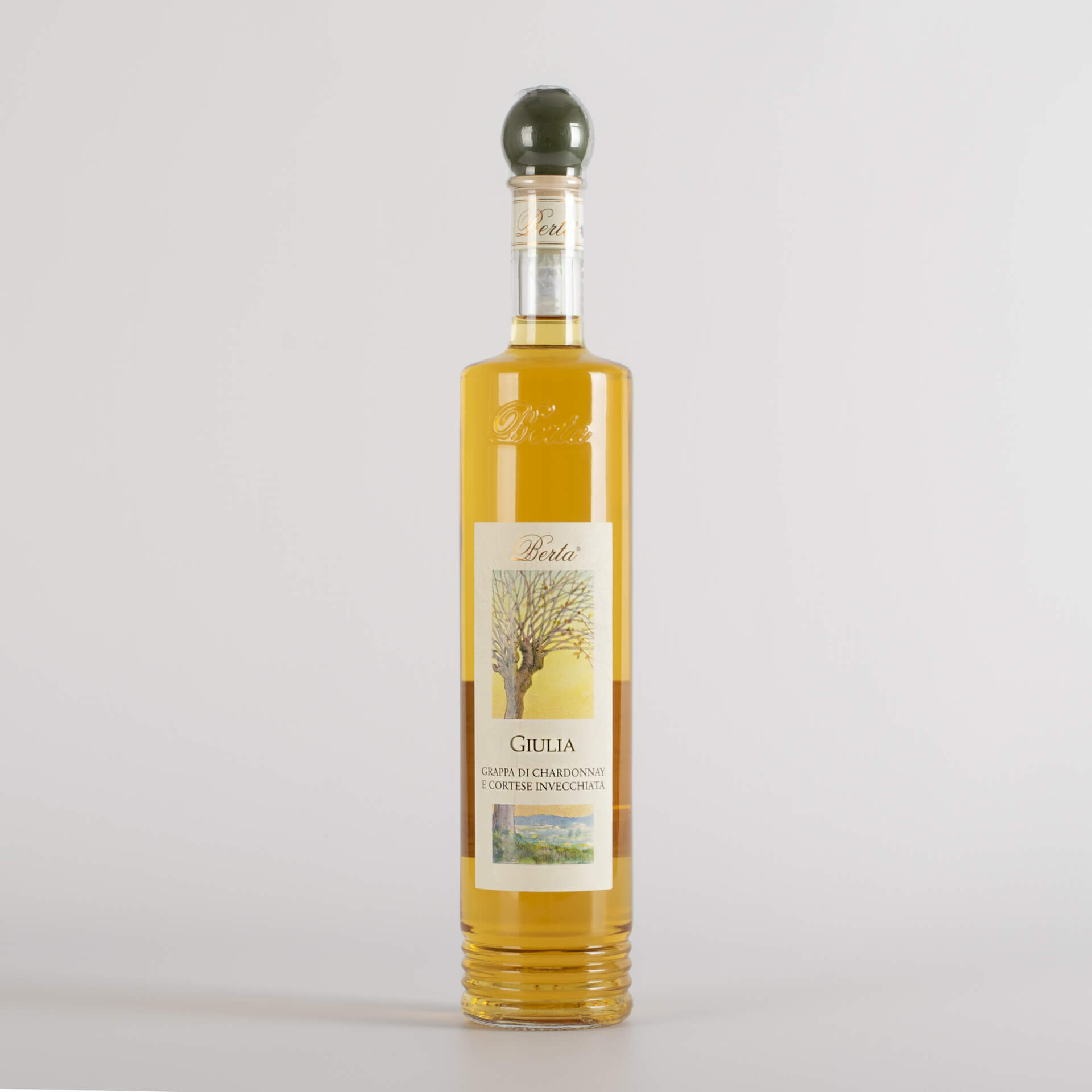 "Giulia" Grappa Berta Grappa Berta
The grappa "Giulia" of Berta comes from the distillation of the Chardonnay and Cortese grape-skins which come from the typical zones of these grapes, selectioned by the best producers.
€22.20 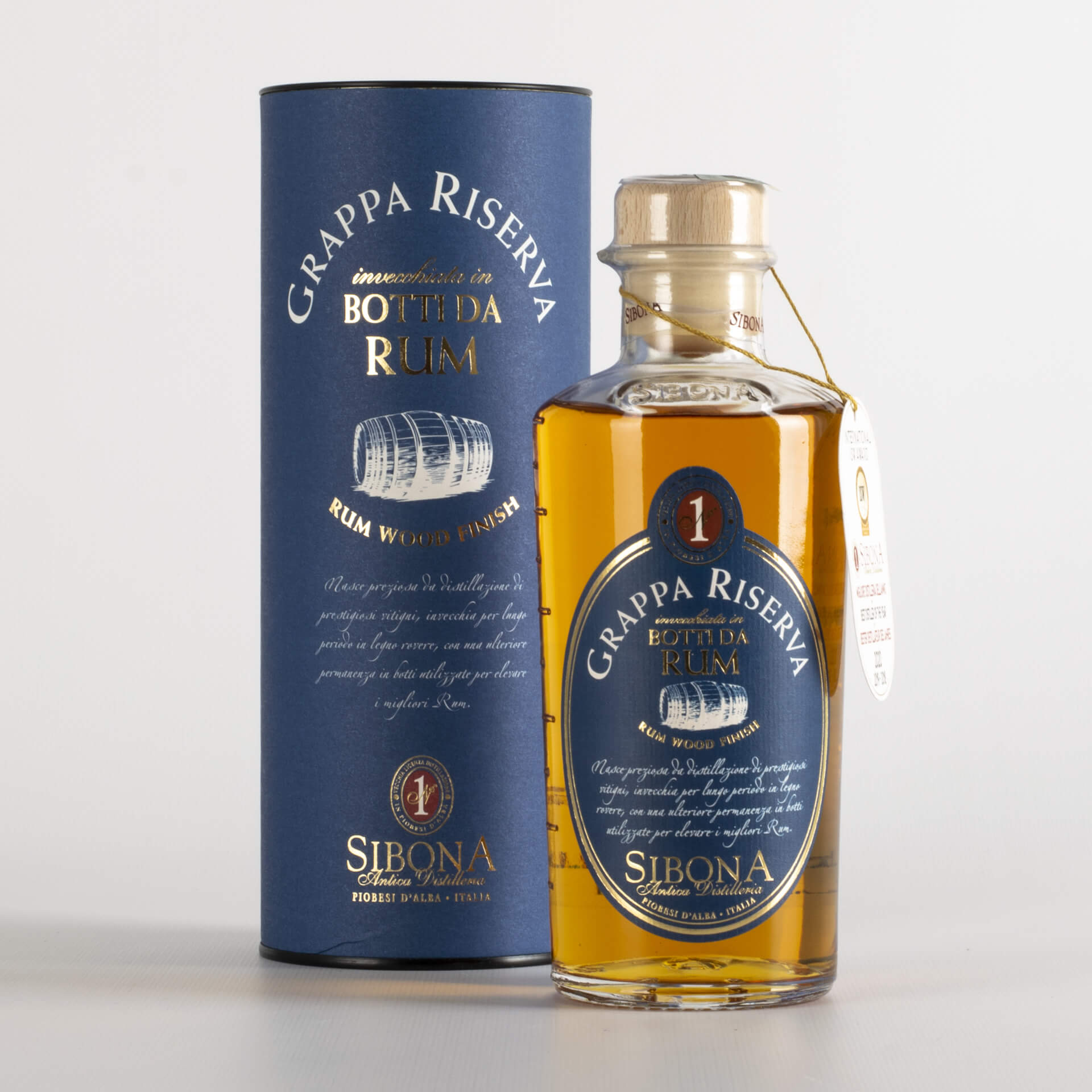 Grappa aged in Rum Barrels Grappa Sibona
This special Grappa Riserva, which has already been aged for a long period in oak barrels, was left to rest for several months in barrels that were previously used to age "Rums" of some of the most prestigious distilleries. This ageing in barrels used to produce rum was experimented in an innovative manner on Grappa and exceptional results, from a quality point of view, were noticed. The rich, refined scent, with spicy nuances and an elegant, distinctive flavour, showing hints of coffee and vanilla and a lingering finish, are reminiscent of the rum that was contained in these barrels.
€25.30 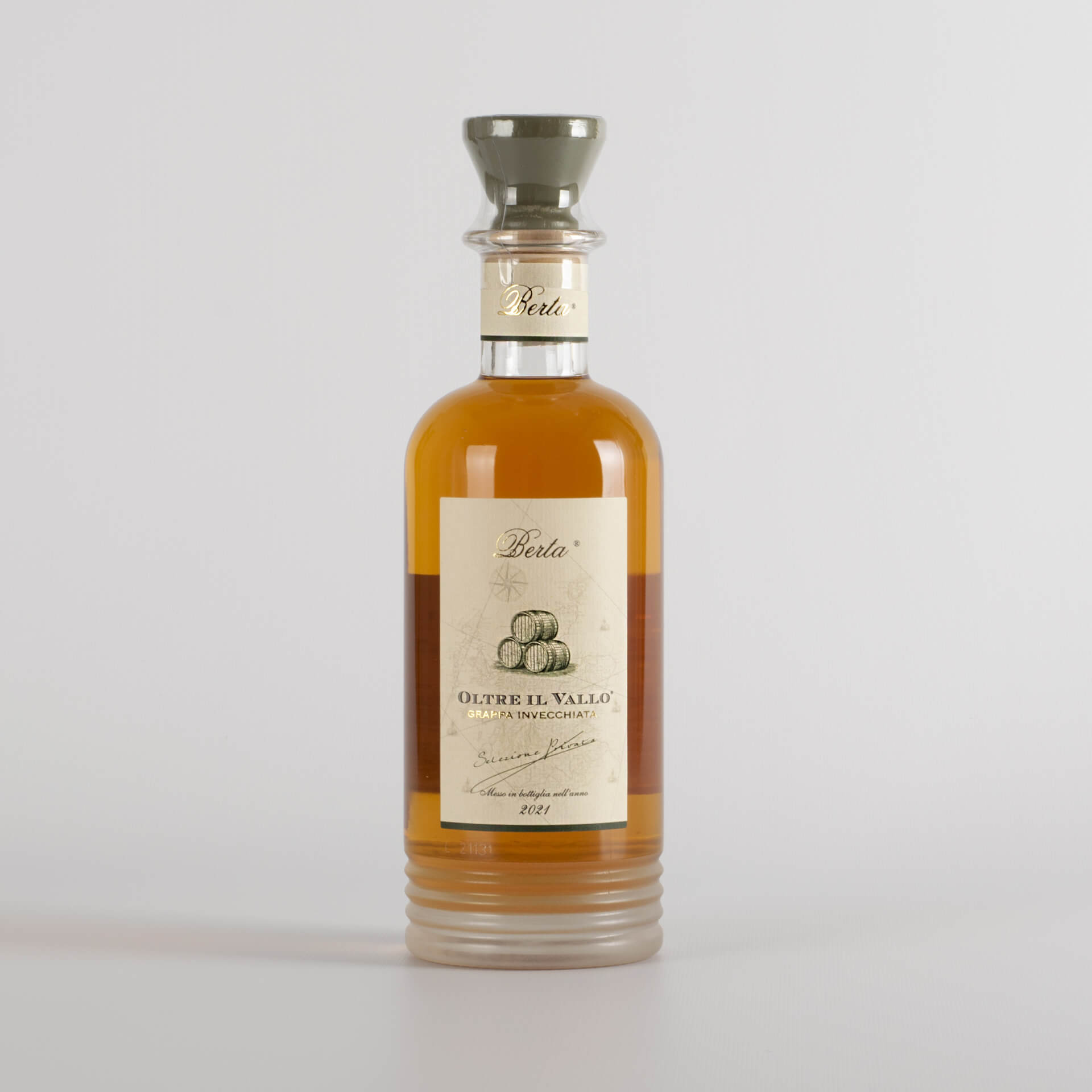 "Oltre il Vallo" Grappa Berta Grappa Berta
We are in May 2010, when in Mombaruzzo a new project came about: "Oltre il Vallo", a most sort after grappa aged in Single malt Scotch whiskey barrels. The project joined together the passion and the artisan masters of the Berta family and that of the best Scottish traditions, represented by the global company "Diageo", prized world leaders of alcoholic beverages. Two very different cultures, but both have the passion for distillation.  On one hand the "grappa", an Italian country-side tradition, and on the other hand the Single malt Scotch whiskey, fruit of the country-side of Scotland. This distillation is aged for 24 months in Single malt Scotch whiskey barrels, where they rest for years in the Berta family's cellar. The barrels, are selected one-by-one arrive from that far away land, from the oldest and most famous distilleries of Scotland:Lagavulin, Caol Ila and Mortlach, important names who have made and still make history for the best Scotch whiskey. Amber in colour, "Oltre il Vallo" is characterized by its soft and round taste. At the beginnig it is an explosion of fragrances which start with the grape skins, currants, dried fruit and almond. After a little while this sensation gives place to a light hint of smoke, peat and malt. Silky and round, in the mouth but on the palate an the nose it gives a sensation of softness, in a bouquet of fragrances that remind us of orange, hazel-nut and towards the end tobacco and honey.
€37.50 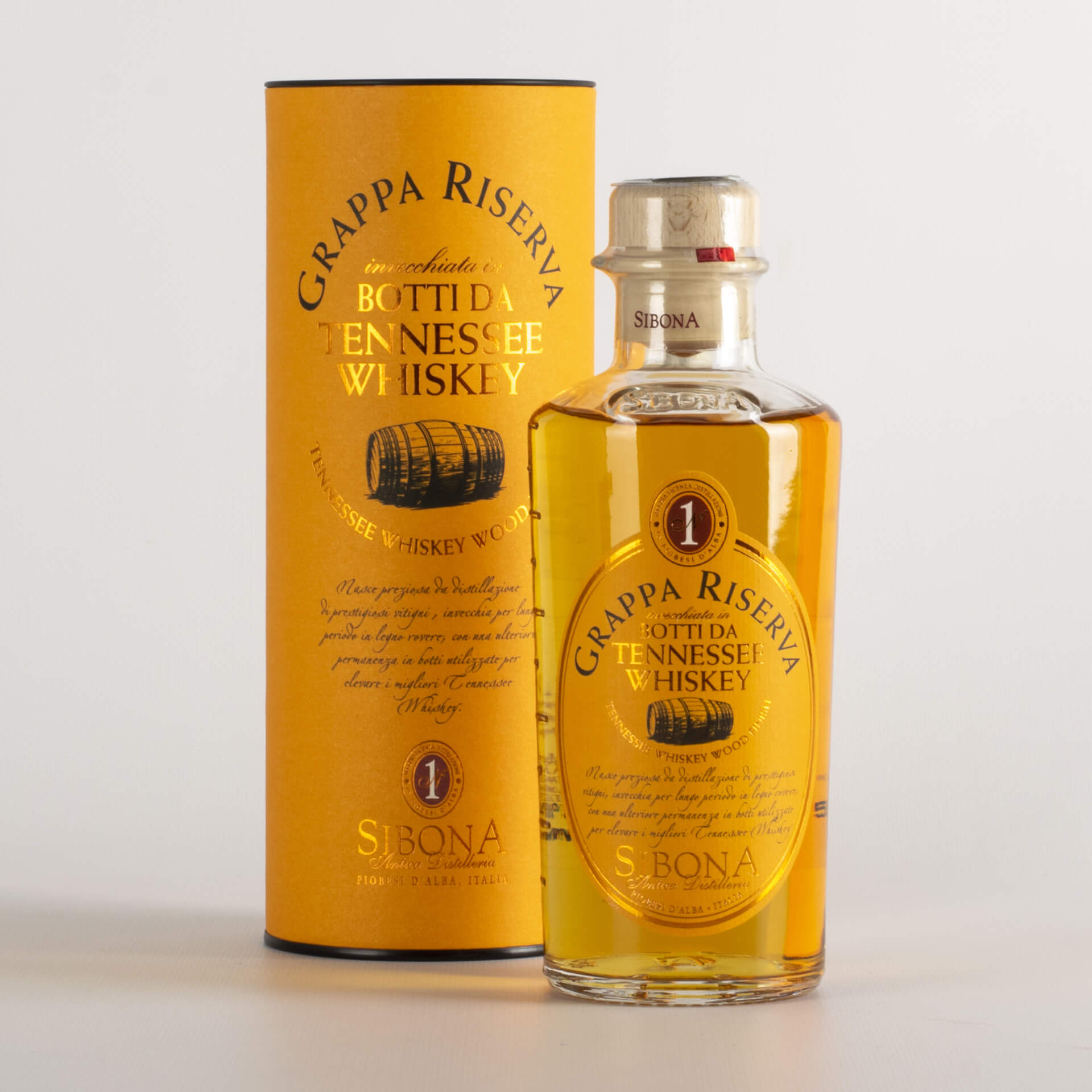 Grappa aged in Tennessee Whiskey barrels Grappa Sibona
Grappa Riserva matured in oak barrels and then in barrels purchased from the United States that confer high quality characteristics, such as intense aromas and a refined flavour.
€24.90 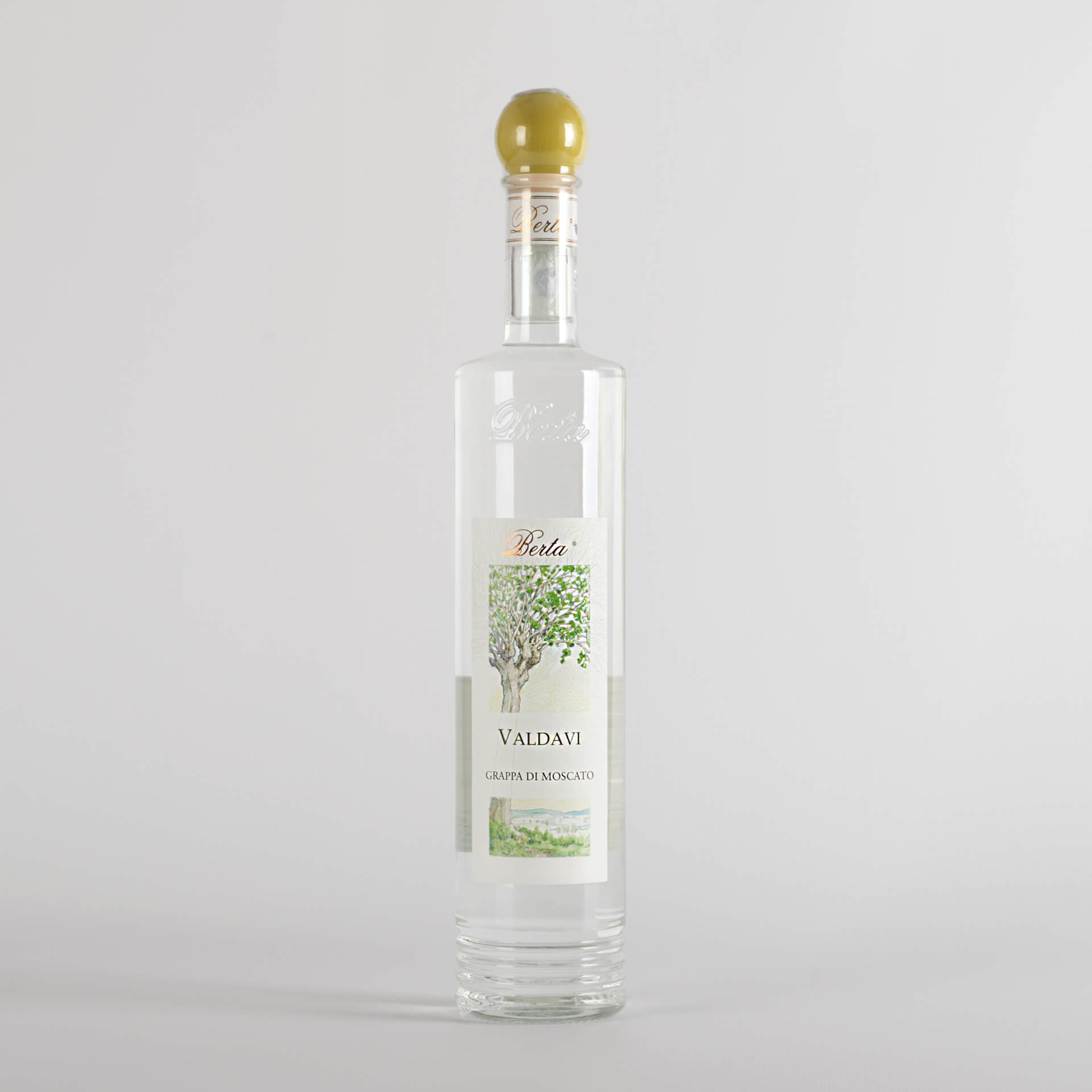 Valdavi Grappa Berta Grappa Berta
This Valdavi grappa is made from Moscato pomace and distilled using the traditional discontinuous still system in copper steam boilers. It is then put in stainless steel tanks for about 3/6 months. It has an elegant, well-balanced, strong aroma and a soft, pleasant flavour.
€23.20 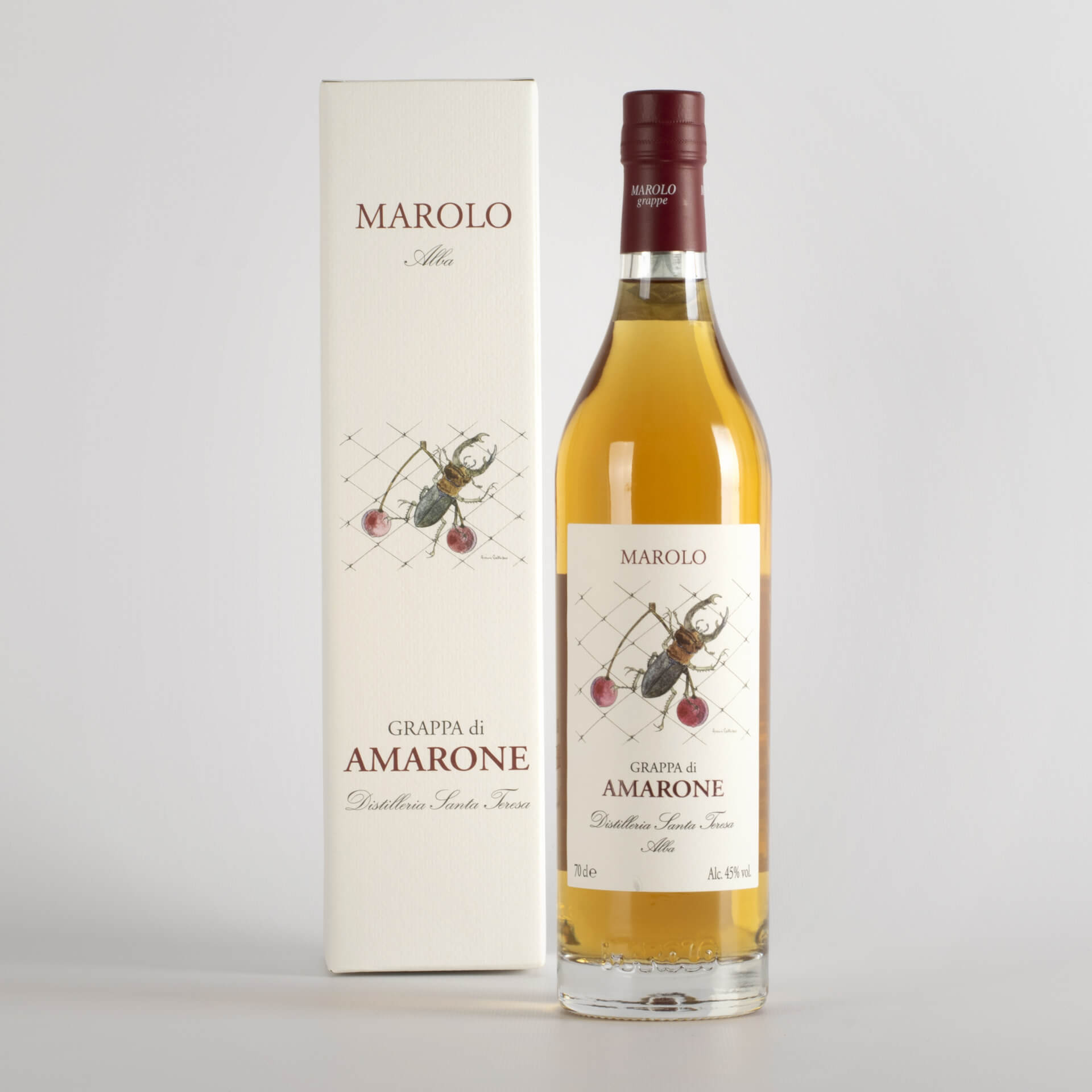 Amarone Grappa Grappa Marolo
The Grappa of Amarone of marolo is made from fresh marcs, still dripping with wine. Soft and elegant, releases scents of cherry, blackberry and dried fruit.
€31.40 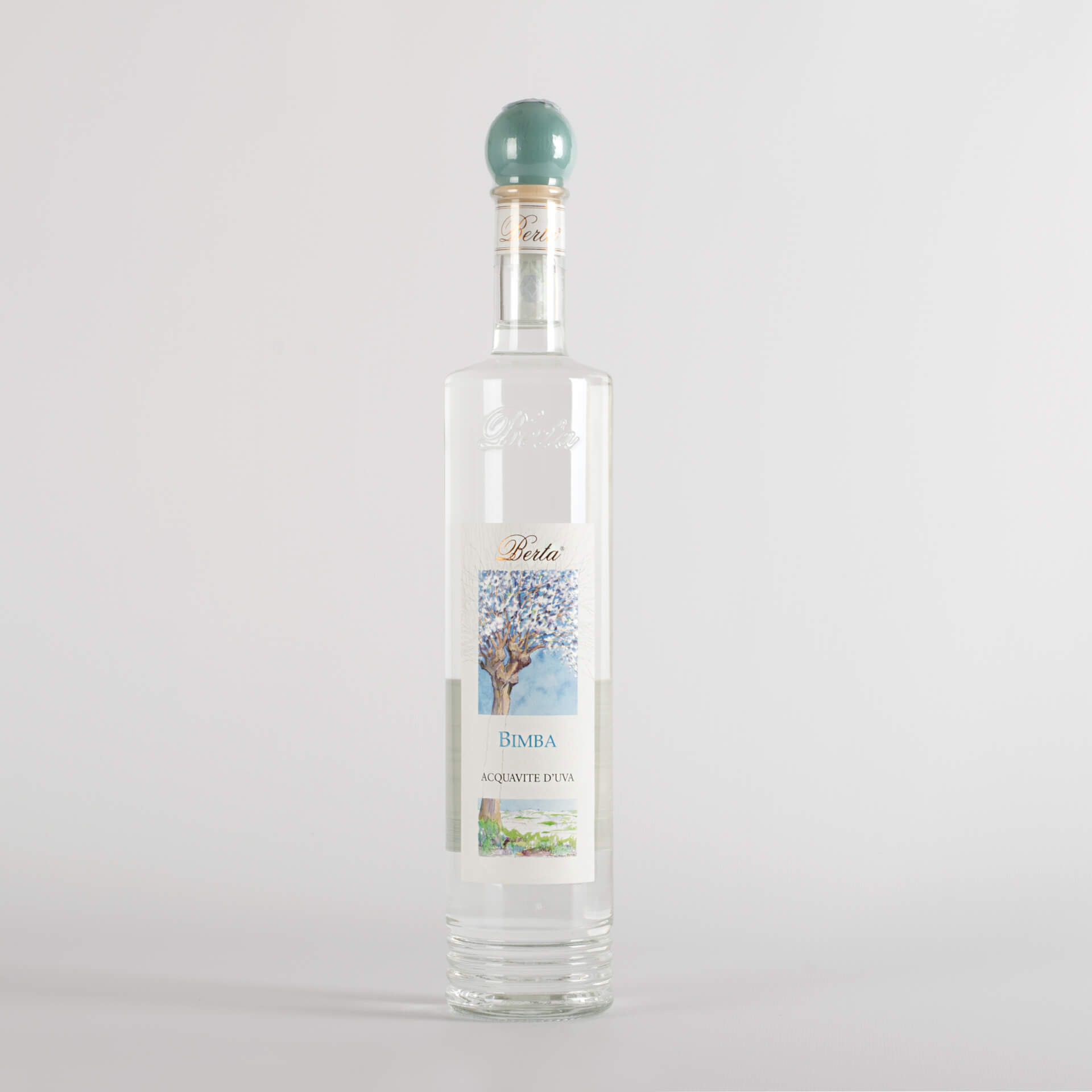 "Bimba" Grappa Berta Grappa Berta
The "Bimba" grappa is produced from the best selections of the mosto of the grapes. It is distilled using the traditional method in copper-steam boilers and then laid to rest in stainless-steel from 3/6 months. It expresses an elegant fragrance, harmonious, soft and round to the taste with hints of roses and woodland fruits.
€26.30 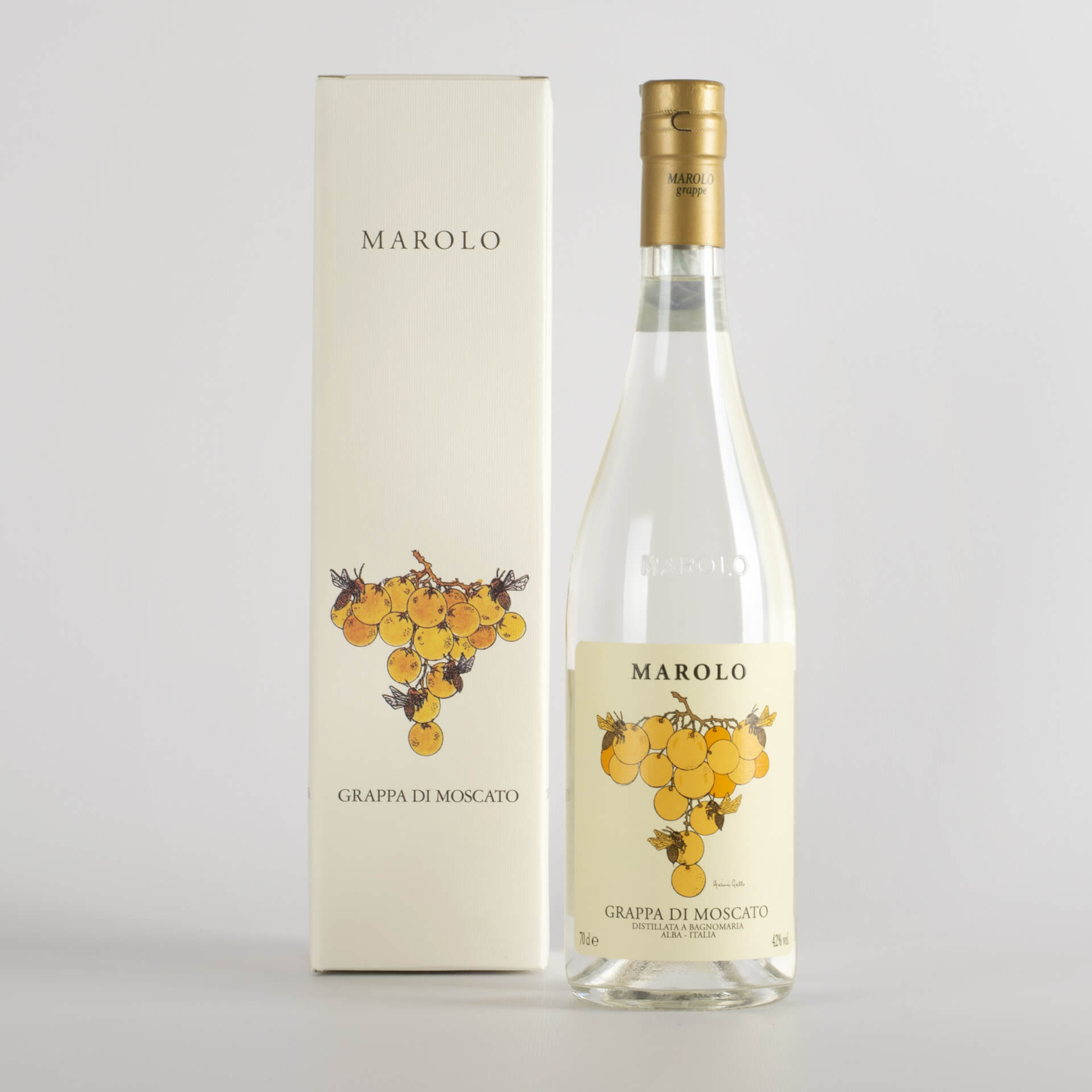 Moscato Grappa Grappa Marolo
This grappa is obtained from the pomace of the Moscato grape. It is transparent and has an intense, aromatic, sharp and very pleasant aroma. The taste is soothing, soft and intensely perfumed.
€26.20